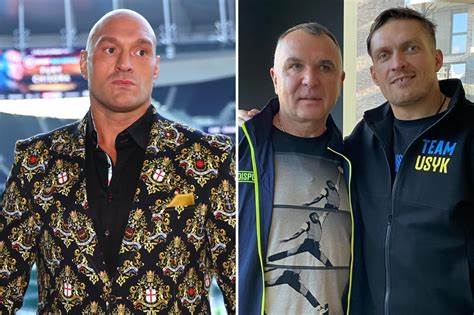 TYSON FURY and Oleksandr Usyk are closing in on a deal to fight for the undisputed heavyweight crown – but it will NOT be in the UK.

The pair of unbeaten champions are ready to put up all four world titles, which would be a first in the blue riband division’s history.

Usyk’s manager Egis Klimas confirmed an agreement is nearing the finish line but warned the unification bout is heading for the Middle East.

Klimas told talkSPORT: “All of us got together and we are almost done, there is not much left to talk about.

“Two heavyweights, the best in the sport today, undisputed heavyweight championship bout, that is what the fans need.”

He added: “Most likely it is going to be no later than March 4 and most likely it will end up in the Middle East.”

Fury, 34, most recently stopped Derek Chisora, 38, in round ten of their trilogy bout, his THIRD win over the veteran Brit.

Usyk, 35, was ringside at Tottenham’s stadium and faced off against the WBC champion.

Talks for their unification took place even before Fury fought Chisora and continued after the title defence.

Usyk has fought in Saudi Arabia before, beating Anthony Joshua, 33, in their rematch in August.

It leaves Saudi as a frontrunner to host the historic undisputed title decider despite interest from World Cup hosts Qatar and England.

Klimas revealed: “I heard other options are coming like maybe London or Qatar.

“But, most likely we are aiming for Saudi because they are very interested in that fight, Saudi loves Usyk.”