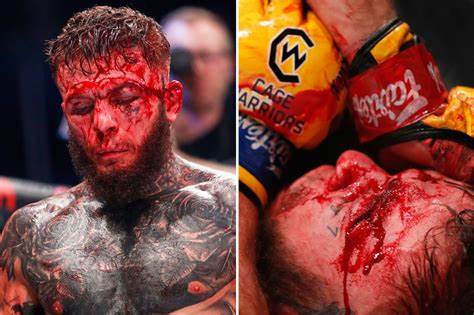 PAUL HUGHES staked his claim for a UFC call-up with a sensational and bloody victory over Jordan Vucenic – who was left unrecognisable after their five-round war.

The pair renewed their rivalry on Friday night in an eagerly-anticipated featherweight title unification bout at the Indigo at London’s O2 Arena.

Entering interim 145lb king Hughes went into their rematch hellbent on avenging his split-decision defeat to his undisputed counterpart.

And he served his revenge cold with a dominant display across five rounds to score a unanimous decision victory.

The Derry destroyer took control of the fight in the third and opened a huge gash up above Vucenic’s right eye late in the stanza.

Hughes dished out more punishment in the fourth, dropping The Epidemic with a vicious combination.

Vucenic was hurt again in the fifth and final round and took more crushing blows on the blood-soaked canvas until the end final horn.

All three judges saw the contest the same way, scoring the bout 49-46, 50-43, and 49-43 in Hughes’ favour and subsequently crowning him Cage Warriors’ undisputed featherweight champion.

MMA fans across the globe were in awe of the thrilling bloodbath, with one saying: “This is incredible.”

Another said: “Amazing fight, tough as nails the two of them.”

And another said: “Great fight! Props to both for the war.

One remarked: “MMA really is the harshest of sports.”

But they were left even more stunned by the bruises [on] Vucenic’s face on Saturday morning.

And another said: “He looks like the elephant man FFS.

“Vucenic will definitely be back and in the UFC in about 3 more fights I’m sure of it.”

Victory over Vucenic was Hughes’ sixth under the Cage Warrior’s banner and third on the bounce.

And the 25-year-old has set his sights on a call-up to the promised land of mixed martial arts – the UFC.

He told The Energized Show: “It has to be [the UFC next] “Cage Warriors? Completed it.

“I’ve taken out all of the best guys in Europe, I’m selling out venues in other countries on Friday nights.

“That’s what I’m doing here. I beat the best, I’ve just unified the title and avenged my only loss.

“In my eyes, I’m 10-0 right now and I am the biggest prospect unsigned to the UFC in the world.

“I’m here to stay, and I’m here to take over the UFC, and with my country behind me, I couldn’t be more proud.”