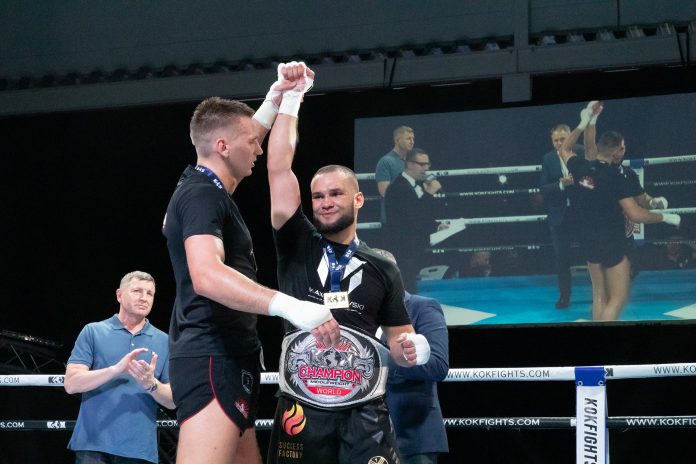 Vorovski (33-5-1)  did his best work with his hands, working the body and  scoring with clean left hooks and right hands over the top. The Estonian also scored with clean low kicks en route to winning a unanimous decision over the tough Iversen (16-5).

“First of all, I would like to thank God that I became victorious. I have a huge respect for Andreas. He’s really strong fighter,” Vorovski told ring announcer Rytis Kuzmenka after the fight.

“I would never won this belt without my family, my parents. So I’m just happy. Thanks everybody.”

“Next is gonna be vacation with my family,” he said when asked what’s next.

“I know he was a strong opponent. That’s why I took the fight. I don’t want any easy fights. I want to fight for the title,” said Iversen.

Remmer Too Much for Holmberg
In the co-main event, KOK 85 WGP winner Ott Remmer (27-11)  put on a dominant performance against Finland’s Oskari Holmberg (0-2).

Remmers quickly cornered his opponent and scored an eight count with a flurry of punches,  before dropping Holmberg with a low kick to the Finn’s rear leg. Holmberg got up slowly from the kick and was counted by the referee.

Holmberg held on at times to weather Remmer’s pressure. In the second, Remmer hurt him with an inside low kick before finishing him with another kick to the inside of Holmberg’s leg.

It’s the third straight stoppage win from low kicks for Remmer, who looks ready for a match with a top 5 lightweight contender.

Bjorkskog connected with some solid punches on Rimkus, who fought with his hands low and moved looking for openings.

The referee deducted a point from Bjorkskog in the second round for clinching behind the head with two hands before throwing a knee.

Late in round three, Rimkus ended the bout in dramatic fashion. He moved forward with a three punch combination before throwing a high kick that connected and knocked Bjorkskog out instantly.

In the opening bout, 18-year-olds Stanislav Teniugin and Ilya Stepanov fought to a draw in an entertaining battle.

Karl-Margus Haud scored a 2nd round knockdown and won a unanimous decision against Aleks Sabinin.

Ukraine’s Bogdan Oleynik took Georgian Bondo Zakariadze down in all three rounds and controlled the action before winning by triangle choke submission in the last round. Both fighters made their MMA debuts.

In another MMA bout, Lithuania’s Mantas Narbutas improved his record to 5-0. Narbutas took the back of Ilja Minin late in round one and sunk in a rear naked choke to remain unbeaten.