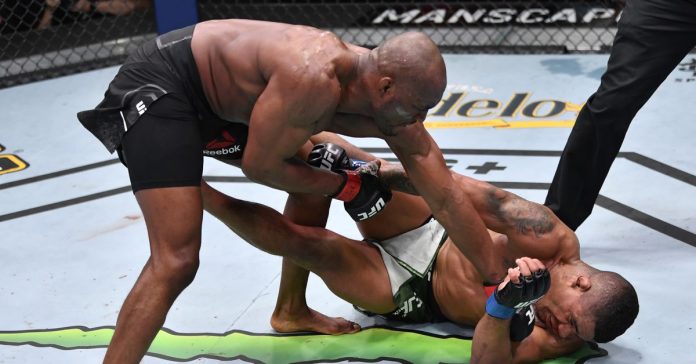 If Dana White could just wave a magic wand and create pay-per-view superstars, the UFC would have at least 12 on the roster to sell a dozen events during the year but that’s now how it works.

When it comes to UFC welterweight champion Kamaru Usman, he’s been a part of a massive card before — his fight against Jorge Masvidal sold 1.3 million pay-per-view buys — but he’s not quite built himself into the kind of draw where fans will tune into watch him compete no matter the opponent.

On Saturday night, Usman proved yet again that he’s by far the best welterweight in the world when he dispatched No. 1 ranked contender Gilbert Burns with a TKO in the third round at UFC 258. Usman has now won 13 consecutive fights at 170 pounds, which moves him past a record previously held in the division by Georges St-Pierre.

He’s also faced and beaten four of the top five ranked fighters in one of the toughest weight classes in the entire sport but somehow Usman is still scratching and clawing for respect, which seems like lunacy to the UFC president.

“The kid’s the real deal,” White said about Usman at the UFC 258 post-fight press conference. “He breaks GSP’s consecutive win streak record tonight. For the people that know, for the people that actually know about fighting, they know that this win tonight was a big deal over a very motivated, well-trained, mentally tough, confident, bad ass kid.

“Listen, this guy’s got nothing but bad ass dudes lined up. If he doesn’t have the respect now, he should have got it after the [Colby] Covington fight. I can’t stop talking about the Covington fight. One of the greatest fights I’ve ever seen. Anybody who didn’t respect him after that, that’s your problem, not his.”

White says anybody who is a devoted fight fan should not only know Usman but understand the kind of accolades he’s already built up since first arriving in the UFC from The Ultimate Fighter.

Since winning that reality show, Usman has remained undefeated while taking out every opponent the UFC has thrown at him including his current reign as champion where he’s successful defended the title three times.

Usman may not be the kind of box office draw like Conor McGregor just yet — and there’s no guarantee that will ever happen — but White knows when it comes to fighting, there’s nobody better in that division.

“What’s going to happen is, if you look at all the guys lined up that he has to fight next, and he keeps doing what he’s doing, we’re all going to pop our heads up one day and start talking GOAT. If this guy can continue. It’s not just how you’re fighting and winning, it’s who you’re fighting. This guy has nothing but straight killers in that division that he has to get through and possibly twice some of them.”

As far as a timeline for when Usman might start crossing over into national commercials or earning huge endorsement deals with major brands, White won’t try to predict the future but he couldn’t imagine a better role model for the UFC when those kinds of opportunities come along.

“I think that’s been the big topic of discussion here tonight,” White said. “At what point do those type of people start to recognize Kamaru Usman and how good he is and he’s a good guy. He’s well spoken. Good family guy, he’s a great dad to his daughter. He’s got an unbelievable backstory. Dresses really well, too.

“He’s the whole package. The guy’s got the whole thing. It’s just when are people going to notice?”