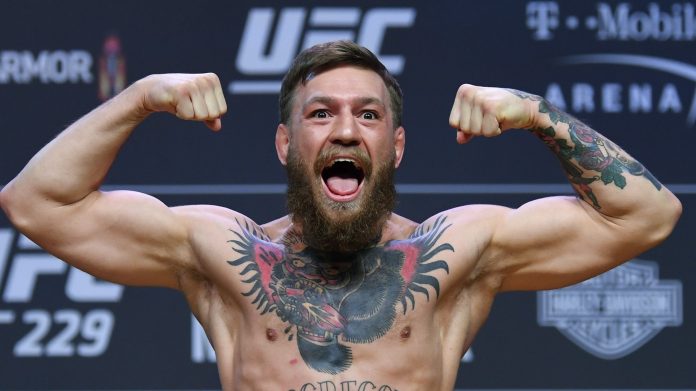 WITH Conor McGregor deciding to come out of retirement for the third time in four years, it’s clear to see it’s not for the money.

Since debuting in the UFC in 2013, the Irish star – who is set to fight Dustin Poirier in January – has transcended the sport and has become one of the richest fighters in the world along the way.

But not only does McGregor rake in the cash through competing, his sponsorship deals and business ventures go a long way in making up his estimated Forbes net worth of £80MILLION.

From becoming the highest paid UFC fighter of all time, a historic crossover fight with Floyd Mayweather and a £750m whiskey business – here is how McGregor earned his cash.

When the UFC sold for $4.4bn in 2016, McGregor credited his exploits as the driving force behind the deal – and he might be right.

The Irishman did not headline a pay-per-view until his sixth bout, but still landed around £400,000 through fight night purses and bonuses.

After back-to-back featherweight titles wins against Chad Mendes and then Jose Aldo in 2015, McGregor pocketed £400,000 for each fight.

In his following bout, losing Nate Diaz in 2016, he received his first million dollar pay cheque, but tripled his money after winning the rematch.

His next two fights, against Khabib Nurmagomedov and Donald Cerrone, he was paid £2.3m, but took home an extra £40,000 for knocking out ‘Cowboy’ at UFC 246.

It takes McGregor’s total earnings from UFC purses and fight night bonuses to around £12m – but his actual profits are much higher.

A large part of his money earned through UFC fights comes in PPV bonuses.

For his loss against Nurmagomedov in 2018, McGregor revealed he made £40m, with reports suggesting he received the same for beating Cerrone.

But his crossover boxing match against Mayweather dwarfs anything he made in the octagon, with The Notorious said to have earned £80million on his ring debut.

In 2018, McGregor unleashed Proper No. Twelve into the crowded whiskey market, and that raked in £750m in its first year.

Before tapping out to Nurmagomedov at UFC 229, he became a one-stop promotional tool for Proper No. 12, every press conference saw him clutching a bottle gleefully.

When it finally came to launching the drink on a dry run at the end of 2018, it completely sold out.

In fact at one point it became so popular that Tesco Ireland customers were only allowed to buy two bottles at a time.

And the showman’s penchant as a salesman must’ve paid off when he revealed the official figures in its first year of business.

Taking to Instagram, McGregor wrote: “Over $1b generated in Whiskey sales in my first year! Like it or not, there is a new King in town! Proper Whiskey, liquid sunshine!”

The whiskey is such a hit in America the company sold six months’ worth of stock in its first 10 days of trading.

It eventually sold 2.4m bottles in the first six months of trading.

McGregor predicts it will overtake Ireland’s biggest distillery Jameson – which has been in business for 250 years.

Known for his sharp suits and tongue, McGregor, who once called David Beckham his fashion icon, has always enjoyed splashing his cash on fashion.

Before he boxed Mayweather in 2017, the Irishman was seen in various suits designed by David August Heil – a man responsible for ensuring the likes of Sylvester Stallone, Will Smith, and Robert Downey Jr are red carpet-ready.

At one fitting the pair decided that they should collaborate together.

After a delay, the ‘Drop 1 Look Book’ collection saw the release of limited edition t-shirts, hoodies and caps.

Heil told The Irish Sun: “Our audience is seriously committed and loyal.

“We sold out of a couple of styles within the first 24 hours of launching the site and we didn’t really promote it other than our immediate followers and Conor’s fanbase.”

August McGregor later introduced tailored suits to their range, as well as winter jackets as his empire continues to grow.

It has been estimated that the clothing line brings in a staggering £50m in profits per year.

PONSORSHIPS AND THE DIGITAL AGE

In 2018, upon a signing a multi-million pound six-fight deal with the UFC, McGregor renewed a contract with Monster Energy drinks worth somewhere in the region of £750,000-per-year.

Brand McGregor also appealed to Reebok, who made him one of their most high-profile athletes and offered him around £4m per year.

And digitally, McGregor knows what’s up when it comes to selling himself.

He has investments in tech products like The MacTalk App, which allows fans to download McGregor soundbites for £1.09 a pop, as well as his own website, TheMacLife.com – a MMA media outlet and news website dedicated to the man, who can’t help but generate money with his name.