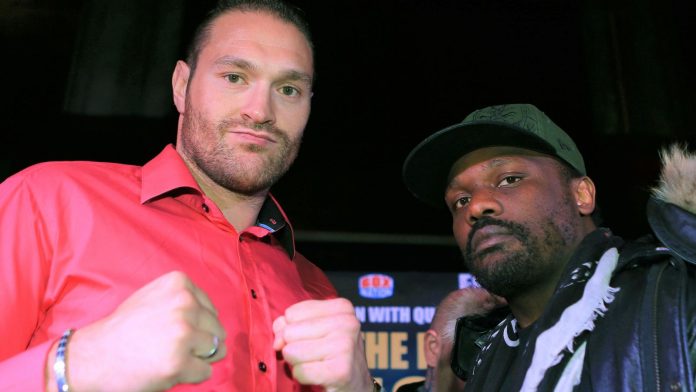 ‘We used to be pals.. until he backed my rival’ – Tyson Fury reveals betrayal caused him to fall out with Derek Chisora

TYSON FURY has revealed he fell out with Derek Chisora after his heavyweight pal backed Dillian Whyte to beat him earlier this year.

Fury, 34, knocked Whyte out in devastating fashion at Wembley Stadium back in April, finishing the contest with a sixth-round uppercut.

But in the days leading up to the bout, Chisora surprisingly picked underdog Whyte to beat the WBC champion.

Del Boy and The Gypsy King had become good friends after their two fights in 2011 and 2014 – both of which were won by Fury.

However Fury, who will take on Chisora for a third time at the Tottenham Hotspur Stadium on December 3, now claims they have fallen out following his old pal’s backing of Whyte.

Speaking in his autobiography – which is out on November 10 – Fury said: “Now I’m due to fight Derek Chisora on December 3 — having already beaten him twice.

“Chisora and I used to be pals but when it came to my Wembley showdown against Dillian Whyte, Chisora tipped the other bloke to knock me out.

“I couldn’t get my head around that. How can you claim to be someone’s friend and then back another fighter to send him to the canvas?

“I really had no idea what was eating him at the time. Perhaps it was jealousy.”

Fury remains unbeaten as a professional, winning 32 of his 33 bouts to date.

His only blemish came in a controversial draw with Deontay Wilder in December 2018 – a result he put right in their subsequent two contests as Fury knocked his American rival out on both occasions.

Meanwhile, Chisora has lost 12 of his 45 pro contests – including seven times since Fury’s second win over him in 2014.

But last time out Del Boy clinched arguably the best win of his career – a split decision victory over Kubrat Pulev.

Despite that, though, Chisora remains a huge underdog heading into the contest.

And if Fury has his hand raised in December, he is expected to face Oleksandr Usyk for all the belts in Saudi Arabia in March.

‘We used to be pals.. until he backed my rival’ – Tyson Fury reveals betrayal caused him to fall out with Derek Chisora | The Sun