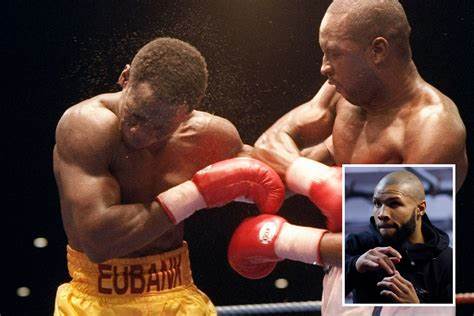 NIGEL BENN will apologise to Chris Eubank Jr for saying he hated his dad – but he still wishes he had split his tongue even worse in their iconic fight.

Thirty years ago the British boxing legends went toe-to-toe in one of the most magnificent fights we have ever seen, with Eubank winning in the ninth round.

The violent victory was made even more impressive by the fact the Dark Destroyer had uppercutted a gash into the Brighton brute’s tongue in the fourth round.

Eubank spent the next five breaks swallowing his own blood so trainer Ronnie Davies would not see the extent of the damage and rescue his man from the fire, before bludgeoning Benn to victory.

On Saturday night the sons of the brilliant rivals clash at a 157lbs catch weight and 33-year-old Eubank Jr insists he will batter 26-year-old Conor Benn for the verbal and physical abuse he inflicted on his father.

But 58-year-old Benn vows to only apologise for one of his assaults – while doubling down on the brutal other.

The former two-weight world champ told SunSport: “Chris Jr says he wants revenge for me saying I hated his dad.

“Now I know that was a very stupid thing to say.

“I don’t hate Chris. I did split the side of his tongue and I wish I split the other side too, because we are in the hurt business and maybe Jr doesn’t quite understand that.

“When I see Chris Jr I will apologise for saying that. Things like that don’t need to be said.

“I said it at the time and at the time I didn’t like him, I disliked him a lot. But I really don’t hate anybody.

“If I have to apologise to Chris Jr then so be it, so be it.

“But I still wish I split both sides of his dad’s tongue because this is the hurt business and maybe little Chris needs to grow up.”

Benn Sr was one of the most volatile figures in modern British boxing – from a seriously spicy selection! – so it’s no surprise his heavy-handed lad is a chip-off-the-old-block.

They fight the same, speak the same and dad reckons they even hurt and heal the same.

“None of my other kids are like Conor,” he said proudly. “Me and Conor are just the same.

“My comeback fight got cancelled when my shoulder went, that was Conor’s next injury.

‘WE ARE JUST IDENTICAL’

“When I bust my ankle or wrist, he always does it a few weeks or months later.

“We even have the same scar just around our eyes, we are just identical.

The Chris Eubanks are identical and so are me and my son.”

Conor was rushed into a 2016 pro debut – on a massive Anthony Joshua pay-per-view show – with barely any amateur experience or training but mentor Tony Sims has worked wonders.

And his reformed father – a notorious party animal away from the ring – is amazed by the dedication his boy has shown to the sport.

He said: “When I used to train in Tenerife I would be down in a bar called Rah Rah’s until all hours and then straight to training from there.

“But Conor finishes training and goes straight home to bed to relax, he gets in proper rest.

“Conor will get up at 4am, 5am, 6am in the morning to go running and train and that used to be the time that I would get home. His dedication is unbelievable.”

The one thing they cannot agree on is who is the better chef – but thankfully their shared spirituality stops things getting too heated in the kitchen and the gym.

When SunSport told Nigel how highly Conor rates himself as a cook, he roared: “He is a good cook but where the hell do you think he learned? I taught him everything he knows.

“My mum wanted me to be a chef, I love cooking and it has rubbed off on Conor.

“Me and Conor have a blinding relationship. We have a laugh and a chat with each other and with everybody else. We wear our hearts on our sleeves.

“There are times when he drives me mad and I want to say ‘eff-off!’

“But – as a born-again Christian – it’s all ‘ok son, no worries, you’re right’ and I walk away to keep the peace, somehow.”