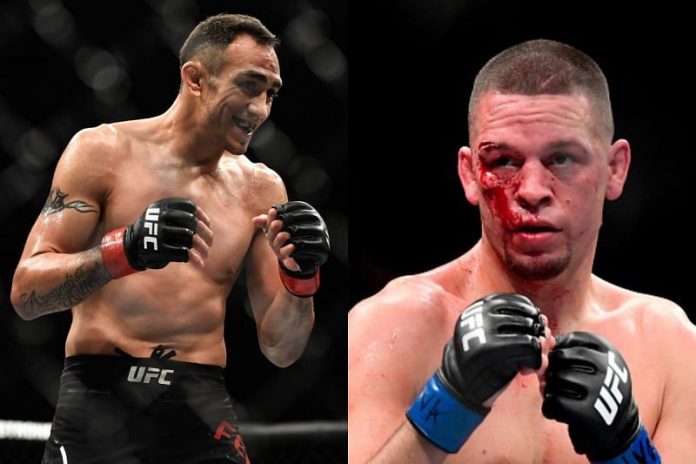 TONY FERGUSON will face Nate Diaz in the new main event at UFC 279 after Khamzat Chimaev missed weight for the clash.

The unbeaten welterweight weighed in for the scheduled Las Vegas bout a whopping seven-and-a-half-pounds over the limit.

In a statement released by the UFC, Chimaev has been advised by the medical team to stop cutting weight due to weight management issues.

The 28-year-old will now pit his wits against Kevin Holland at a catchweight bout of 180lbs in the co-main event at the T-Mobile Arena this weekend.

Stepping in for the Swedish star is UFC veteran Ferguson, 38, who hasn’t fought since his brutal knockout defeat by Michael Chandler in May.

Ferguson, who was originally set to take on Li Jingliang, is on a four-fight losing streak stretching back to May 2020.

It is believed to be Diaz’s last fight of his 15-year UFC career with the 37-year-old on the final bout of his contract.

Diaz instantly hit out out Chimaev after his fight with Ferguson was confirmed where he stated his rival was scared to meet him inside the octagon.

He said: “Tony’s been around a long time, we should have fought a long time ago.

“You guys already know what it is. Real Gs come from California, America motherf***er.”

Ferguson meanwhile has promised there to be fireworks when he squares off against his compatriot.

He remarked: “Grab your f***ing popcorn and blue Slushees motherf****er because we’re going to have some fun!”