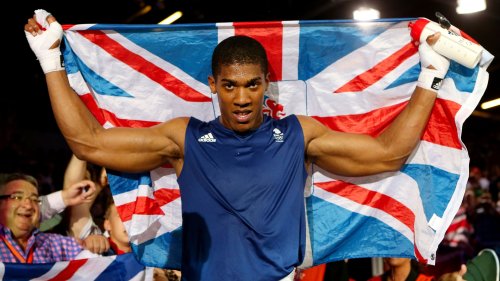 I’d tell the 2012 AJ to work harder… and make sure he NEVER loses his world heavyweight crown, says Anthony Joshua

ANTHONY JOSHUA would have told his Olympic-winning self to work even harder — and make sure he did not lose his world heavyweight crown.

A decade and four days ago the Watford hulk became a national hero by winning super-heavyweight gold at the London 2012 Olympics.

It catapulted the 6ft 6in powerhouse towards three world titles and millions of pounds.

But Joshua now recognises he could have put even more graft in, especially before the points defeat to Oleksandr Usyk last September, which cost him his WBA, IBF and WBO belts.

The pair meet again in Jeddah on Saturday in what is a must-win fight for AJ.

Joshua, now 32, was asked what he would say if he could go back in time and have a word with his 22-year-old self.

He said: “I’ve got a lot of experience I could pass on.

“I would definitely say to train hard. I trained as hard as I could for the relevant task but I’ve trained harder this camp, to be honest with you.

AJ also admits that ten years into his career he does regret not yet meeting Deontay Wilder and Tyson Fury.

Deals for both — to decide an undoubted heavyweight ruler — came agonisingly close, before collapsing.

Fury then won two out of three magnificent fights with the American and took No 1 spot in the division.

Joshua, with 24 wins from 26 fights, added: “I can’t say I would have changed much else.

“Maybe I would have probably had other fights. Maybe the Wilder fight, the Fury fight, but they didn’t happen.

“Other than that, everything’s been relevant for the time.

“But now looking back on it, I would pass on my knowledge to the younger, up and coming fighters. I feel like I’ve gained a lot of experience.”

Following Fury’s most recent retirement on Friday, his Ring Magazine belt is now on the line in Jeddah — alongside AJ’s old straps.

The Ring belt is seen as being held by the clear boss of each division.

But Joshua laughed: “Eddie Hearn rung and messaged me about it and I didn’t even reply. I am not even interested in the Ring Magazine belt.

“That’s where my mind is at, this is just about the fight.”

I’d tell the 2012 AJ to work harder… and make sure he NEVER loses his world heavyweight crown, says Anthony Joshua | The Sun