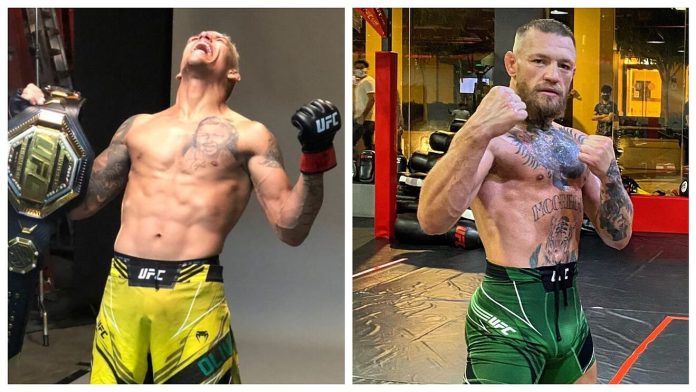 CHARLES OLIVEIRA has claimed the UFC refused to entertain the prospect of him fighting Conor McGregor.

Former lightweight king Oliveira made a beeline for The Notorious after choking Justin Gaethje out cold at UFC 274 in May.

A fight with McGregor, however, has not yet come to fruition for the submission specialist – who will vie with fellow grappling phenom Islam Makhachev for the vacant 155lb belt at UFC 280 in October.

Although he’s excited to test himself as the Dagestani destroyer, Oliveira said of the match-up: ” I didn’t want this fight. Everyone knows it.

“I wanted the big payment from the other fight. However, everyone knows that I’m a UFC employee. You can’t escape that. So we tried to negotiate from every angle.”

McGregor, 34, loosely entertained Oliveira’s fired-up post-UFC 274 challenge but has yet to express an interest in fighting Do Bronx again.

New fan favourite Oliveira said: “I would have chosen Conor if I could but he is silent.

“So what popped up instead was Makhachev and he deserves all the respect in the world.”

Oliveira’s clash with Makhachev will take place at the brand-spanking-new Etihad Arena in Abu Dhabi, where the Russian received a raucous reception before nearly breaking Dan Hooker’s arm at UFC 267.

The 32-year-old said: “I tried New York because it was a neutral ground.

“But the fight was decided there [Abu Dhabi]. But to be honest the cage is the same anywhere in the world.

“But look at my last eleven fights and look at Makhachev’s last ten fights, what he does best is putting people on the ground.

“If he does that again he will putting down the biggest finisher in UFC history.”

The venue for his third UFC title, however, fight matters little to Oliveira.

He said: “Unfortunately the fight didn’t come to Brazil or neutral ground, it went to their territory

“But you saw what happened when it went to Gaethje’s house and it will be no different this time.”

Former two-division champion McGregor is in the final stages of recovering from the horrific broken leg he suffered in his trilogy fight with Dustin Poirier last July.

The Irishman recently said in a Twitter voice note: “I’m buzzing cuz I want to come back.