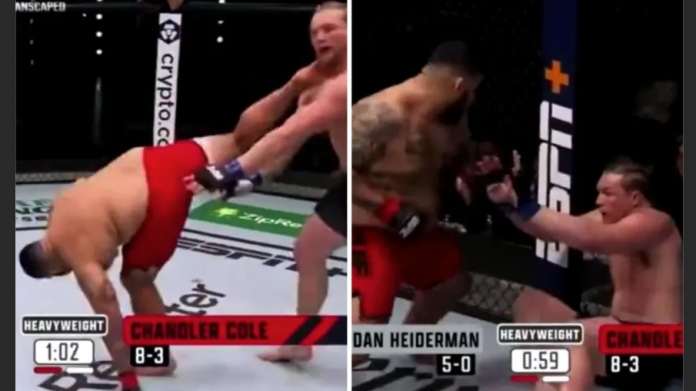 MMA heavyweight Chandler Cole claimed he was “a role model for all dad bods around the world” after an entertaining bout with Jordan Heiderman in Vegas.

The pair fought on a packed bill at Ultimate Fighter 30 for a place in the semi-finals of the MMA tournament.

But despite some acrobatics from Cole, he was outlasted by his opponent in their heavyweight showdown.

TUF30 events are usually fought over two rounds, but the scorecards were level sending the fight to another five minutes.

Cole might have ultimately fallen short with the overall result.

But he produced the moment of the fight after landing a stunning, spinning back-heel kick in Round 1.

The 27-year-old is known at ‘The Hammer’ and certainly delivered a decent blow on an unsuspecting Heiderman.

Cole stands 5ft10 and tips the scales at 265lbs, with the full force of his spinning kick sending his opponent crashing into the octagon cage.

The Virginia-native piled in after the kick with a flurry of punches, trapping his opponent on the ground as he looked to seal victory.

But 6ft3 Heiderman fought back impressively to maintain his unbeaten 6-0 record – even if UFC kingpin Dana White disagreed with the judges decision.

White said: “I didn’t agree with the judges. I didn’t think that this should have gone to a third round. But it happens so what’re you going to do?

“At least in The Ultimate Fighter you have an opportunity to go out there, dig deep, and try and make it to the semis.”

Cole was proud of his performance after the fight, despite the defeat.

He said on Twitter: “Well… didn’t get the win, but at least I’m a role model for all dad bods around the world.”