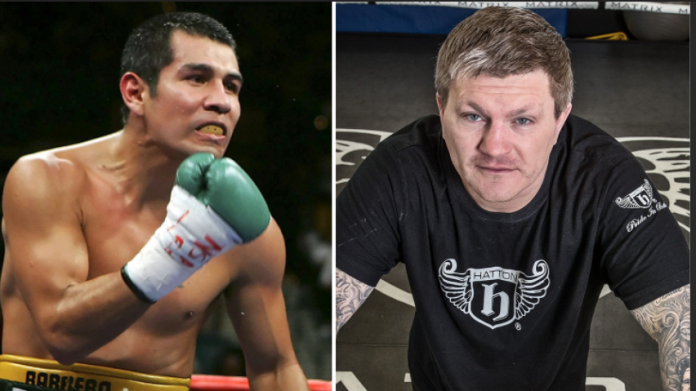 RICKY HATTON has confirmed Sun Sport’s exclusive that he is returning to the ring to face Marco Antonio Barrera.

The 43-year-old Manchester boxing legend will make his comeback on July 2.

And he will face the Mexican, 48, in his hometown in an eight-round exhibition bout.

He tweeted: “I can confirm my return to the ring.

“Join me for a huge party night – with top music acts – in Manchester on July 2. #HitmanRises.

Hatton initially retired back in 2009 after he was beaten courtesy of a second round TKO in Las Vegas by Manny Pacquiao.

But three years later he made a comeback, only to be stopped by Vyacheslav Senchenko in the ninth.

However, his scrap with Barrera will not be scored and no winner will be announced.

Barrera, who was beaten by fellow Brit Amir Khan in 2009, last fought when he beat Jose Arias in 2011.

The star held world titles in three different weight divisions during his pomp and also faced PacMan twice, losing on both occasions.

He retired with a record of 67 wins from his 75 fights, 44 of which were via knockout, with one no contest.

Sun Sport broke the news back in February that Hatton was due to pull on the gloves again.

Hatton’s career-defining fight was his unforgettable war with Kostya Tszyu in front of a capacity crowd at the MEN Arena in June 2005.

The Hitman, whose only other loss from his 48 fights came against Floyd Mayweather, produced a sensational display in the 11th round to force the Australian to quit on his stool and relinquish the IBF and The Ring light-welterweight titles.

His comeback is the latest in a long line of legends of yesteryear returning to the ring.

Former heavyweight champs Mike Tyson and Roy Jones Jr kicked off the trend in November 2020 when they returned for a lucrative exhibition bout.

Ex-Tyson rival Evander Holyfield also made a shock return to the ring last year at the age of 58 but was wiped out by former UFC light-heavyweight champ Vitor Belfort.

However, former world champion Hatton is adamant that his return is not cash motivated.

He said: “I am doing this for fans who struggled being locked up with Covid.

“I got a call and was asked if I would come back to do this for the fans who have been locked up for ages after Covid.

“Covid has been tough for me, for everyone. I want to inspire people who have had mental health problems, too.

“They can look at me and say ‘He struggled and now look at where he is’ so they can do it too.”