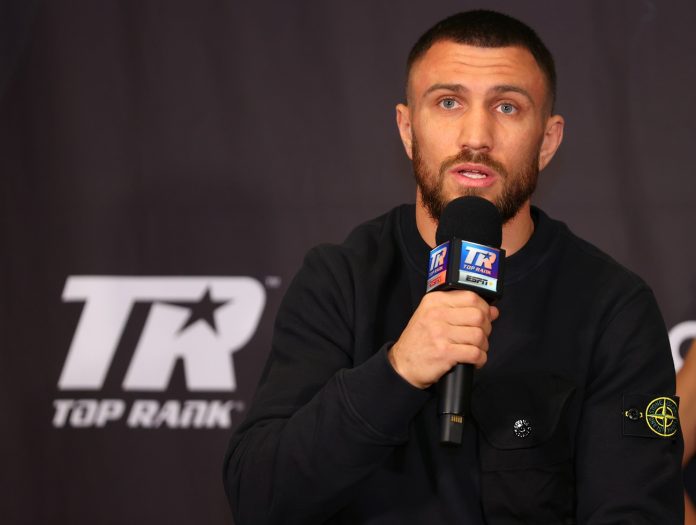 By Huck Allen: In a big surprise, Vasily Lomachenko has emerged as the frontrunner for undisputed lightweight champion George Kambosos Jr’s first defense of his titles on June 5th at Marvel Stadium in Melbourne, Australia

WBC lightweight champion Devin Haney remains in contention for the fight with the unbeaten Kambosos (20-0, 10 KOs) despite what promoter Lou DiBella said recently about them moving on. Obviously, it’s all part of negotiations.

Kambosos and Dibella are believed to be going in the direction of the biggest payday they can get, and the Top Rank-promoted Lomachenko could be the guy that brings them the most money. Backed by ESPN, Lomachenko is in a good position to get the fight.

It would be a daring move on the part of Kambosos to face the former three-division world champion Lomachenko (16-2, 11 KOs) next, as this isn’t a good match-up on paper for him.

Boxing fans are split in who they want to see Kambosos face next. While some are interested in seeing Kambosos take on the talented 33-year-old Lomachenko, many other people feel that the undefeated Haney (27-0, 15 KOs) should be the one that faces him.

Those fans like the idea of Haney getting the fight because the Kambosos-Haney winner would be the true undisputed champion at 135.

However, the fight still wouldn’t prove who the best fighter is in the lightweight division, considering that Lomachenko is viewed by many as #1 and Gervonta ‘Tank’ Davis #2.

Tank likely will never fight any of those guys because his promoters at Mayweather Promotions are keeping him isolated fighting only PBC fighters.

The Marvel Stadium has a seating capacity of 53,359, which is a little smaller than the 70,000 that it was believed Kambosos Jr would be fighting in for the first defense of his 135-lb titles.

“George Kambosos is slated to make the first defense of undisputed lightweight championship on June 5 at Marvel Stadium in Melbourne, Australia. June 5 is a Sunday that allows for the prime-time U.S., telecast on June 4. Fight expected against Vasiliy Lomachenko or Devin Haney,” says Mike Coppinger on Twitter.

“Vasiliy Lomachenko is the clear front-runner, per sources, but Devin Haney is in contention.”

Haney’s promoter Eddie Hearn of Matchroom Boxing won’t give up without a fight in trying to get the Kambosos match. Hearn has talked night and day about wanting the Kambosos Jr fight, and he’s not going to want to be outbid by Top Rank, as he was during the recent purse bid for the Tyson Fury vs. Dillian Whyte fight.