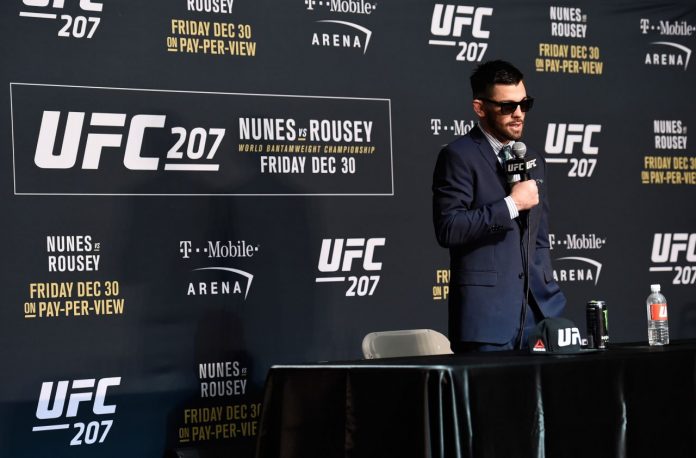 UFC 249 a shot at redemption for Dominick Cruz

By the time he steps into the cage on May 9 at VyStar Veterans Memorial Auditorium in Jacksonville, Florida, it will have been 47 months between victories and 41 months between fights for Dominick Cruz.

Cruz, 35, remains one of the great fighters in the history of mixed martial arts, a superb combination of brains and brawn. His footwork was unsurpassed and he got more out of his body than just about anyone who ever stepped foot into the Octagon.

When Wayne Gretzky was at his peak in the NHL, he said he would pass the puck not to where his teammate was, but to where he was going. He was a step or two ahead of everyone else on the ice, and seemed to see the game as if he were watching from the upper deck with a view of where everyone was at all times.

Cruz is similar in the sense that he was able to use his footwork to anticipate and create openings that he took advantage of repeatedly. He understood the game at a level few others ever have. It’s why he is such a brilliant television analyst.

On May 9, his task is a lot more difficult than breaking down the nuances in Tony Ferguson’s game. He will try to lift the bantamweight title from Henry “Triple C” Cejudo in the co-main event of UFC 249. Cejudo is a -250 favorite to retain his belt, with Cruz at +200 at the MGM Grand Sports Book in Las Vegas to regain it.

If he pulls it off, it might be the most inspirational victory in the history of the sport.

No fighter has had the volume of catastrophic injuries that have plagued the former champion. When he defeated Demetrious Johnson on Oct. 1, 2011, Cruz improved his record to 19-1. He’s only fought four times in the eight-plus years since.

If Cruz pulls defeats Cejudo, it won’t be anywhere close to the biggest upset by the odds. But it will be a monumental victory nonetheless and one that would be talked about for years to come.

Much is made, and rightly so, about Muhammad Ali’s forced exile from boxing and what it took from him. But that was Ali’s only lengthy absence from fighting. Cruz has had multiple. After beating Johnson, he was out for two years, 11 months and 26 days, or four days short of three years, before beating Takeya Mizugaki.

He was out 15 months after the Mizugaki fight, before coming back on Jan. 17, 2016, in Boston to regain the bantamweight title in an epic battle with T.J. Dillashaw.

He fought three times in 2016, his most in a year since 2010, but hasn’t fought since. On fight night, it will have been three years, four months and nine days since he last fought, a loss to Cody Garbrandt.

Beating an elite fighter like Cejudo after such an absence is almost unthinkable. If anyone is going to do it, though, bet on it being Dominick Cruz.

Amanda Nunes knocked out Cris “Cyborg” Justino in 51 seconds on Dec. 29, 2018, to win the featherweight title, but hasn’t defended it yet. She was tentatively slated to defend against Felicia Spencer on the May 9 card, but withdrew, saying she needs more time to prepare.

Nunes’ partner, Nina Ansaroff, is pregnant and due in September, so it would seem to make sense for her to defend her featherweight title before then. Once the baby arrives, she’s probably not going to be looking to fight any time soon.

But while that is understandable, and while the UFC’s women’s featherweight division is tiny, the belt still needs to be defended.

Fighters earn the most money when they fight for, and then hold, UFC titles, and it’s not fair to make other women wait. Nunes needs to commit to fighting Spencer soon or surrender that belt.

Hopefully, Nunes will meet Spencer for that belt in June or July, so there isn’t a need to create an interim title.