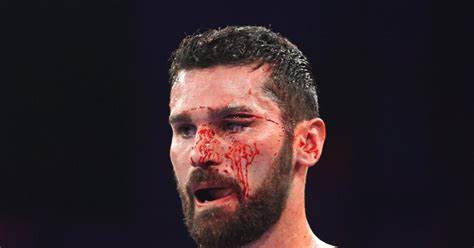 The Italian was left covered in blood during his heavyweight clash with Jonnie Rice.

He suffered a cut above his left eye following a thunderous right hand from the 35-year-old veteran in the sixth round.

The humongous hit left Vianello with blood streaming down his face.

It also opened a deep laceration that was ruled bad enough for the fight to be stopped.

The referee initially thought the gruesome cut came as a result of an accidental clash of heads.

But ringside officials reviewed the footage and decided a brutal punch from Rice had in fact caused the cut.

The fight was then waved off 42 seconds into the seventh round.

It was the first time he had lost in 12 bouts, with 10 wins and a draw to his name prior to Saturday’s clash in New York.

Despite the horror injury and defeat, Vianello remained in good spirits.

He was captured by Top Rank after the fight saying: “Mama, I’m ok. Don’t worry.”

Meanwhile, the victorious Rice said: “I did it again.

“Another undefeated fighter. I’m not here to call anyone out right now. I’m going to enjoy this victory and then see what’s next.”