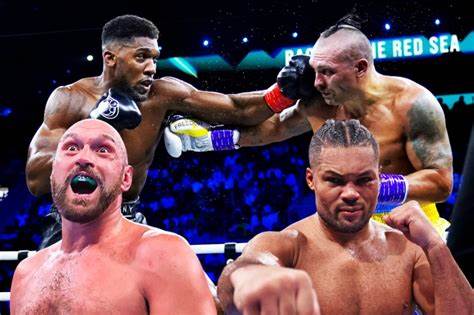 TYSON FURY is in line to fight THREE times in 2023 against the likes of Oleksandr Usyk and Joe Joyce… but not Anthony Joshua.

Fury and Usyk are currently in talks for the heavyweight division’s first ever four-belt unification bout, which is eyed for March.

And unbeaten contender Joyce, 37, is primed to contest the winner while standing as the mandatory challenger for the WBO belt.

It potentially sets Fury, 34, up for a hectic year with his promoter Frank Warren hoping for a hat-trick of bouts.

Warren wrote in his latest website column: “The booming heavyweight division will be featuring strongly in our plans across the next 12 months.

“Top of the to-do list is finalising the undisputed showdown with Oleksandr Usyk that will dominate the spring schedule.

“If Tyson can vanquish the great Ukrainian, then he has said himself that he is eyeing up a big Wembley night with Big Joe Joyce and that is a fight I would love to make and one that would once again break records at the national stadium.

“With Tyson wanting to fight three times this year, there is plenty of scope for huge heavyweight action.”

Fury has not fought more than twice in a year since 2018, when he made his boxing comeback.

But after ruling out retirement, for now at least, the Gypsy King looks on course to be an active fighter.

It will gives fans hope of Fury at last fighting long-time rival Joshua, 33, following years of failed talks, most recently in December.

But with AJ set to ease himself back, after consecutive losses to Usyk, 35, Warren does not see him fitting in Fury’s plans.

He said: “I’ll tell you why I can’t see it. Tyson’s told me what fights he wants, that’s number one.

“And number two is they don’t want the fight. They had the chance to make it and we had all that palaver.”