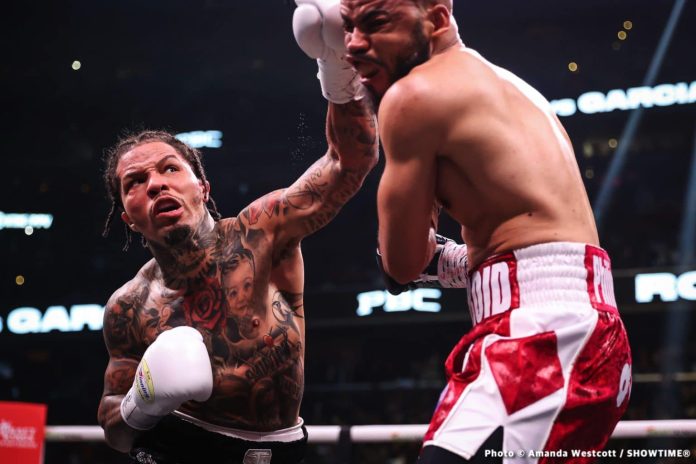 In the sixth round Garcia had the better of the action as both fighters were throwing one punch shots with few combinations. In the seventh round the champion Davis started landing lead lefts to the delight of his fans. In the eighth round Davis hurt Garcia as a small riot started outside the ring halting the action. By the end of the round Davis had Garcia hurt and unable to come out for the ninth round complaining of an eye injury. Fight was even on this writer’s card after 8 rounds. Referee was Earl Brown.

In the seventh rounds final seconds Ennis had Chukhadzhian looking like a beat man as the bell sounded walking slowly to his corner. In the eighth round Ennis landed a pair of overhand rights to the head as the first minute came to an end. In the final seconds there was an exchange, rare in this one. In the ninth round Chukhadzhian landed his first combination near the end of the first minute to the chin of Ennis. Ennis kept up the pressure having Chukhadzhian on the run the rest of the round. In the eleventh rounds final minute Ennis landed three rights from southpaw on the chin hurting Chukhadzhian. Ennis is frustrated trying to end this one. In the twelfth and final round after twenty seconds Chukhadzhian landed his best combination to the chin of Ennis. Ennis once again took over after that. In the final minute Chukhadzhian stood his ground and paid the price before moving again as Ennis ended the fight pitching a shutout! Scores were all 120-108 from the judges and this writer. Referee was Malik Waleed.

In the first two rounds Villa followed Ellis around hardly landing many punches while Ellis countered with jabs and some body work being much faster a hand and foot. Halfway through the round the fighter’s had their first exchange. Ellis continued controlling the fight. In the fourth round a right uppercut from Ellis on the chin of Villa rocked him halfway through the round. Villa in the final minute got a left uppercut to the body of Ellis. Ellis took another round. In the seventh round Villa landed a double left hook to the body with the second one a little low hurt Ellis. In the ninth rounds final half a minute Villa landed a left on the ear of Ellis rocking him. In the tenth rounds final twenty seconds a right from Villa on the side of the head of Ellis buckled the knees of Ellis. In the eleventh Villa was bleeding from the lower lip at the end of the round having one of his best rounds. In the twelfth and final round a left hook a minute into the round from Villa on the chin and down went Ellis taking an 8-count from Referee Brent Bovell. In the final seconds after a lot of holding by Ellis a 3-punch combination on the head from Villa dropped Ellis with another punch landing by Villa while Ellis was down for an 8-count from Referee Bovell as the bell sounded saving Ellis from a stoppage.

Former WBO Middle champ southpaw Demetrius “Boo Boo” Andrade, 32-0 (19), #167 ¼, of Providence, RI, defeated Demond “D’Bestatit” Nicholson, 26-5-1 (22), #167 ¼, of Laurel, MD, over 10 rounds, with a final round knockdown. In the second round a right jab from southpaw Andrade followed by a left to the neck dropped Nicholson for an 8-count from Referee Malik Waleed with a little over a minute gone. In the third round Andrade suffered an abrasion on left eyebrow. Andrade is returning to the ring after 14 months from shoulder surgery.

In the fifth round a left to the body from Nicholson and a push and down went Andrade ruled a slip by Referee Waleed a minute into the round. Andrade had a 5-punch combination to head and body in the final minute. In the sixth rounds final minute a solid left jab from Nicholson to the right eye stopped Andrade in his tracks. In the seventh round Andrade landed a right on the chin and then grabbed Nicholson behind the next pulling him to the canvas. In the eighth round Andrade had Nicholson pinned in a neutral corner for the first two minutes dominating the round. In the tenth and final round a left from Andrade on the chin of Nicholson dropped him for an 8-count from Referee Waleed. All 3 scores were 100-88 as was this writer’s.