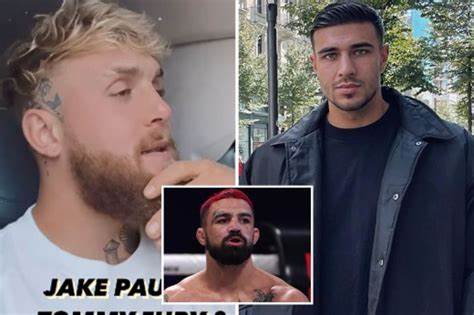 JAKE PAUL has accused Tommy Fury of “running” from their fight and could now turn to Mike Perry for his boxing return.

The YouTuber-turned-prizefighter plans to return by February but is still without a confirmed opponent.

But the American took to social media to claim his celebrity boxing rival is refusing offers sent to him.

Paul said: “Mike Perry, it might be your lucky year, because Tommy is running again.

“If only the fans knew how much I was offering Tommy and he’s still ducking me. It’s pretty sad.”

But the 8-0 boxer, brother of 34-year-old WBC heavyweight champion Tyson, has been given the chance to once again reschedule.

And it was rumoured Fury was being offered $2million to fight Paul, who beat UFC legend Anderson Silva, 47, in October to move to 6-0.

It leaves Perry, 31, as a wildcard alternative to welcome the social media sensation back to the ring.

The former UFC welterweight left the MMA promotion in 2021 and signed with Bare Knuckle Fighting Championship.

He is 2-0 in BKFC and recently took to Twitter to reveal a signed bout agreement with Paul.

And if Fury fails to agree terms with the self-proclaimed “Problem Child” – Perry could be the selected opponent.