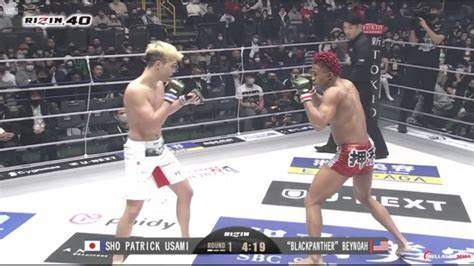 MMA fighter Sho Patrick Usami faceplanted Noah Bey with one of the most shocking KO’s you’ll ever see at RIZIN 40.

Lightweights Usami and Bey met on the undercard of the event held on Saturday in Saitama, Japan. Usami was looking to rack up back-to-back wins, while the 11-4 kickboxer Bey was hoping to get his second MMA win.

But the American, despite his kickboxing credentials, was outclassed on the feet early in the fight. As the duo traded jabs in the center of the ring, Usami suddenly switched things up by unleashing a hellish right that immediately put Bey out cold, sending him face-first into the canvas.

Watch Usami get the finish below.

Usami is now 5-1 since making his professional debut in May 2021. The 22-year-old Japanese had previously earned a TKO win against Shinji Sasaki on his RIZIN debut in October last year.

For Bey, this was the second time he had suffered a first-round KO in 2022. In April, the 27-year-old was KO’d after just 40 seconds in his kickboxing fight against Kaito Ono. Bey is now 1-3 in his professional MMA career, having previously lost to Koji Takeda via armbar at RIZIN 33 in December 2021.