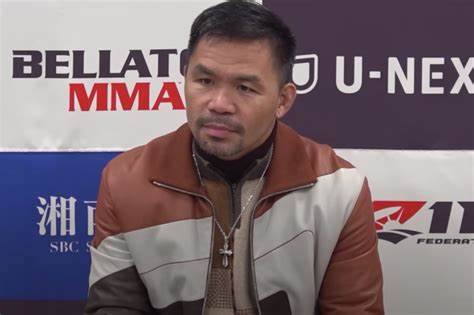 MANNY PACQUIAO announced he will return to boxing with MMA promotion Rizin and teased his next fight against an ex-UFC star.

The Filipino icon officially retired after defeat to Cuban Yordenis Ugas in August 2021.

But following a failed presidential election in the Philippines, Pacquaio talked up a boxing comeback and fought again in December.

He beat South Korean YouTuber DK Yoo in an exhibition bout and has now signed up to fight again with Japanese MMA promotion Rizin.

Pacquiao, 43, said: “There’s great action, there’s great fights in Rizin, and the atmosphere of the crowd is amazing.”

The eight-division champion also confirmed that his contract is for a boxing bout and not kickboxing or MMA.

Pacquiao was ringside in September to watch as Mayweather beat Asakura in two rounds, which sparked talk of a rematch.

But Mayweather ruled out a second fight with his great rival, who he initially beat on points in 2015.

The American legend has had five exhibition bouts himself since retiring as a professional in 2017 after beating ex-UFC champ Conor McGregor, 34.

Mayweather has faced kickboxers, MMA stars, YouTubers and even an ex-sparring partner.

And after Pacquaio eased past DK Yoo, he looks set to also take on competition from the world of MMA in the boxing ring.

Pacquiao added: “It’s good to have an exhibition fight last December 11, and I’m excited and so happy.

“My opponent is martial art, who doesn’t know about boxing, so that’s why he experienced a hard time in the ring.

“But this next exhibition match here in Japan, this is different because I think probably my opponent is a professional UFC, MMA fighter, so he knows how to punch and of course to cover.”