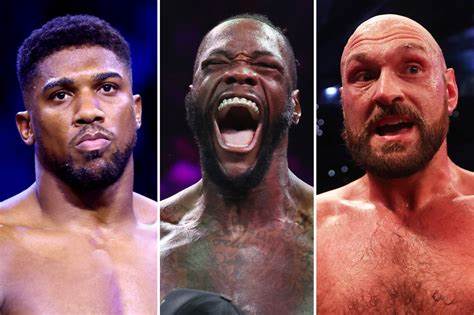 Joshua lost his heavyweight crown to Oleksandr Usyk in 2021 and failed to win it back in a Saudi Arabia showdown last August.

But promoter Hearn has a plan in place to get AJ back to the top, and it could begin with a fight against a top 15 opponent in April.

Hearn revealed an announcement on that bout is expected in the next week, and once Joshua overcomes that hurdle he could fight Dillian Whyte for a second time, or Deontay Wilder.

But Hearn wants his fighter to take the smart option and hinted that Wilder could be Joshua’s third fight of the year, with Tyson Fury another option.

Hearn told the DAZN boxing show: “Anthony Joshua and Canelo Alvarez are in the works to announce that first slate of 2023. AJ is fighting a month earlier than Alvarez, so he’ll be pretty much ready to go with an announcement in a week or so.

“We pretty much know his date. We’re down to three or four opponents that we’re talking to. Obviously, rumours of his new training team, and there will be a full announcement from Joshua on that.

“The plan now is to rebuild him to become a three-time heavyweight world champion, and the trainer will want to take the appropriate steps to do that.

“It’s all very well being brave, listening to Twitter, going out, and fighting Deontay Wilder [next] and doing this and doing that, but there has to be a plan, a smart plan.

“A smart plan is he wants to return against a top 15 guy in a credible fight and return in the summer against probably Dillian Whyte and then move forward against Wilder or Tyson Fury in a mega-fight in the ultimate 2023.”

Former heavyweight champion Evander Holyfield advised Joshua to “play the game” if he wants to get back to the top.

That could mean a first fight of the year against a boxer where he is the heavy favourite, with Otto Wallin mooted as a possible opponent.

Then could come a showdown with Whyte which Hearn previously tipped for the summer, before a blockbuster tie against Wilder or Fury.