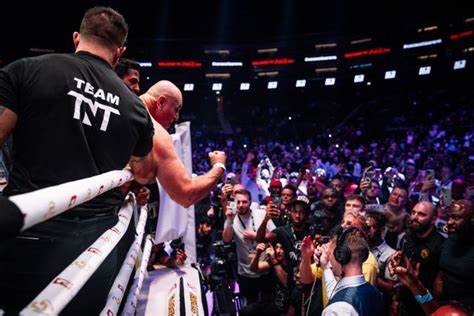 JOHN FURY has been hailed for taking off his top and trying to goad Jake Paul into a fight with his son Tommy.

Paul was ringside in November to commentate on Fury’s exhibition bout against Rolly Lambert in Dubai.

And after going the six-round distance, the celebrity boxing rivals exchanged words as tempers threatened to boil over.

Even Fury’s dad John got involved, taking off his T-shirt and calling Paul out himself.

Sonnen said on his YouTube channel: “Remember that moment when the old man took the shirt off and started shadow-boxing?

“The old man is one of the great characters in boxing, he is a carny and he understands this to a level that he took his shirt off.

“He knew his son can’t do enough, he knew his son has been very close and this is his moment and he’s face-to-face not only with the guy but with the guy that’s going to make the decision on if my son gets a once-in-a-lifetime opportunity.

“He didn’t believe that his son could close the deal so he took his shirt off and he shadow-boxed.

“And that’s the fight that I have been against, I don’t want Fury to get put in that spot, he doesn’t want the match, he can’t win the match, that’s OK.”

The two have twice signed to fight but Fury pulled out both times, firstly after a rib injury last December and then amid a US visa issue in August.

Paul, 25, is set to return in February off the back of his win over UFC legend Anderson Silva, 47, in October.

And he confirmed a “seven-figure” offer was sent out to Fury, 23, whose promoter Frank Warren is negotiating for a UK fight.