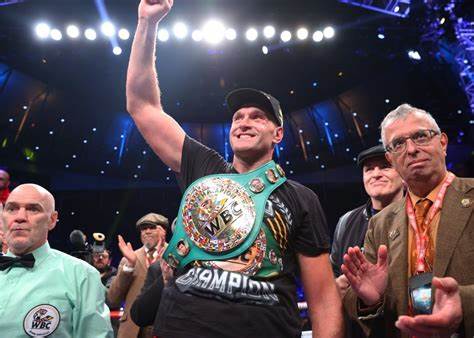 However you want to bill a boxing pound-for-pound list, fight fans still love to compile and compare them.

If we rounded up all our elite fighters at one shared weight and put them in fantasy fights, who would reign supreme?

For example, how much does Tyson Fury rely on his size?

After all, he’s 6ft 9in and most-recently tipped the scales at 268lb.

The Ukrainian won his last fight against Jamaine Ortiz to take his pro record to 17-2 but was pushed all the way and only scraped through via unanimous decision.

What these questions mean is this… none of us really know and we look silly when we guess.

But anyway, here’s our most-recent crack at a pound-for-pound top ten…

Oleksandr Usyk takes the top spot as he once again bested a much bigger, stronger fighter as he waltzed his way to a second-straight win over Anthony Joshua.

Tyson Fury comes second despite another impressive year. Having beaten Dillian Whyte and Derek Chisora in 2022, you could argue he just needed that one big fight… Anthony Joshua, anyone?

Naoya Inoue racked up yet another win earlier this month as his sensational career goes from strength-to-strength. He gets our P4P bronze medal.

Canelo Alvarez slips down to fourth after a mixed year – following up his light-heavyweight defeat to Dmitry Bivol with a super-middleweight win over Gennady Golovkin.

Terence Crawford only fought once in 2022 – but retained his WBO welterweight title for a SIXTH time with a comfortable win over David Avanesyan. Cracks our top five.

Gervonta Davis beat Rolando Romero in May to retain the WBA lightweight crown and already has TWO fights early in 2023 on his calendar – against Hector Garcia and Ryan Garcia.. no relation. Deservedly takes sixth on our list.

SunSport’s boxing P4P rankings revealed but which star pips Tyson Fury, Naoya Inoue AND Canelo Alvarez to No1? | The Sun