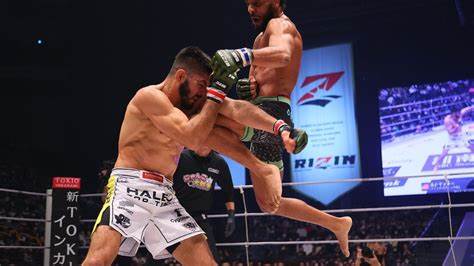 A.J. McKee made it a clean sweep for Team Bellator at Rizin FF 40: Rizin vs. Bellator

The former Bellator featherweight champion defeated Rizin FF lightweight champion Roberto de Souza by unanimous decision in the main event of Saturday’s card, which pitted the top names from the top organizations against one another. With the win, Bellator beat Rizin FF 5-0 in their cross-promotion showdown.

The event took place at Saitama Super Arena in Saitama, near Tokyo, Japan. The main card airs on Showtime via tape-delay at 8 p.m. ET.

McKee (20-1) and de Souza (14-2) arguably put on the best fight of the main card. The two went back and forth on both the ground and feet. It was a high-paced bout.

In Round 1, McKee looked to establish dominance on the feet, but de Souza pulled guard and forced him into grappling. Against his corner’s advice, McKee didn’t look to get back on his feet and welcomed the ground work. The rest of the round, it was McKee landing ground-and-pound from top and keeping defensively sound, while de Souza looked to set up submissions from bottom.

Things really picked up in Round 2. De Souza stood with McKee and the two traded shots, at times getting wild in their exchanges. It was fairly even on the feet, and then de Souza managed to get the fight to the ground and get the back around the halfway point. De Souza had good control, but didn’t look to get close in any of his submission attempts. With about a minute remaining, McKee slipped out and began punishing the Brazilian. Big strikes, body stomps, knees to the head while downed – McKee put it on de Souza.

In the final round, de Souza clearly was the one who shinned. He took a more aggressive approach and took down McKee several times, while taking his back a couple of times, and attacking from multiple positions. McKee spent the majority of the round trying to defend takedowns and fighting off submissions.