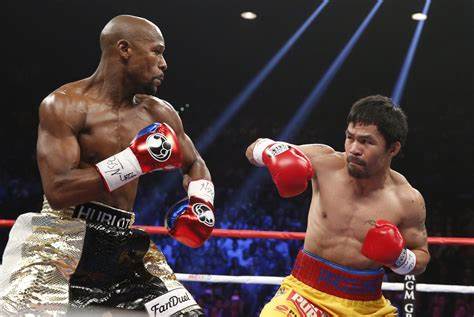 MANNY PACQUIAO will be back in action next year following a successful return to the ring.

The former eight-weight world champion laced up his gloves earlier this month for an exhibition with South Korean martial artist DK Yoo, which he won via unanimous decision.

But the pride of the Philippines has announced will get back in the squared circle next year under the RIZIN banner.

Pacquiao was a surprise guest at RIZIN 40 in Tokyo on New Year’s Eve and revealed he’d “agreed to fight in RIZIN next year.”

An opponent hasn’t been set for Pacquiao’s maiden fight in the promotion, although the boxing great is “excited to fight a Japanese fighter.”

RIZIN chief Nobuyuki Sakakibara – the former head of the now defunct Pride Fighting Championships – was quick to quiz Pacquiao on his willingness to face “any Japanese fighter.”

But Pacman doubled down on his willingness to fight anyone Sakakibara presents him.

Pacquiao teased a fight in RIZIN in September when he attended a press conference to promote old rival Floyd Mayweather’s clash with Mikuru Asakura.

That led to talk of a rematch between the pair, although Pacquiao doesn’t foresee it ever coming to fruition.

He told FightHype: “I’m willing to have a real fight with him, not an exhibition.

“We need to answer those questions in the minds of the fans.

“I was affected the first year because people were asking me, ‘When is the rematch?’

“Up until now, they’re asking when is the rematch with Mayweather.”

Pacquiao brought the curtain down on his Hall-of-Fame career last September following a unanimous decision to defeat Yordenis Ugas.

“It’s done because I’ve been in boxing for a long time and my family says that it is enough.

“I just continued [to box] because I’m passionate about this sport.

“I will just support other boxers for us to have a champion again.”