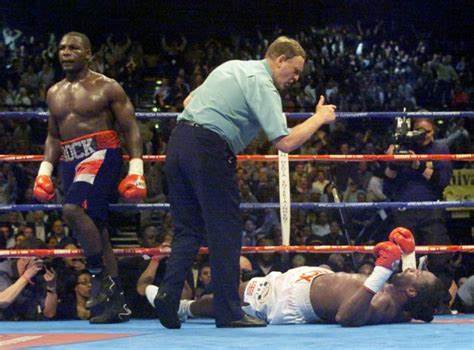 The heavyweight hero was born into boxing with his dad John and uncle Peter both fighters.

And Fury was trained by his father from the age of ten but never really had a passion for it.

That was until Rahman shockingly knocked out Lewis in their 2001 thriller in South Africa.

Fury, now 34, told iFL TV: “My first ever memory of boxing – like massive memory – was Lennox Lewis versus Hasim Rahman. The first one.

“We waited up all night to watch it and whack – he got chinned out in a few rounds didn’t he? And that was my first real, massive boxing memory.

“Obviously I’d been watching boxing way before that, but not really ever interested in it until that moment.”

Fury was just 13 at the time but did not have his first bout in the ring until another three years later.

He weighed 14 STONE aged 14 and as a result was banned from junior amateur boxing.

Fury had a short 32-4 record in the unpaid ranks before turning professional aged 20 in 2008.

Fast forward 14 years and he is the No1 heavyweight in the world, unbeaten in 34 fights and twice reigning as champion.

Fury revealed the first time he watched greatness in the ring up close was when Ricky Hatton beat Kosta Tszyu in 2005.

He said: “The first massive fight I went to was probably Ricky Hatton versus Kosta Tszyu, that’s as big as it gets.

“It was in Manchester and it was for the belt against a legendary champion.

“I believe there was about three or four other future world champions in there that night.

“Me, Crolla, Terry Flanagan, all from Manchester and all went on to win the world title. We were all inspired by “The Hitman” all of us.”