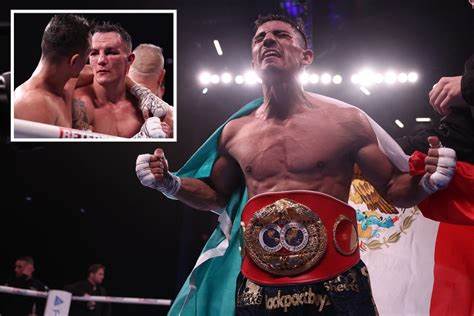 The 32-year-old Leeds legend was outpointed by the 29-year-old with scorecards of 114-114, 115-113 and 115-113 just hours after England had crashed out of the World Cup after their captain Harry Kane missed a penalty.

Fans packed the Leeds arena early on to watch the match between fights – with one thirsty punter spewing up all over the press seats – and Warrington felt just as sick when he got the result delivered.

Warrington roared “f*** the doubters” in the pre-fight promo video that was beamed out above the ring moments before he made his entrance.

The 29-year-old Mexican entered the Yorkshire arena on a three-KO win streak and he definitely fancied another short shift on his UK trip.

The Mexican hurled left and right hooks and uppercuts in from miles out and one landed enough to smash Warrington’s nose and leave him bleeding from the earliest exchanges.

But the Englishman did the better boxing with jabs and straight rights to Lopez’s head and body.

Lopez kept complaining about headbutts in the second and then referee Bob Williams called for a break after he was cut on the corner of his left eye from a collision.

Warrington was definitely wary of Lopez’s power and kept a high guard. Thankfully most of the haymakers sent in his direction could be spotted after half an hour before he caught most of them on his gloves.

Lopez liked to crouch deep down onto his haunches and leap into every left hook and uppercut.

But Warrington was wise to his tactics and hyper-vigilant, especially after the brutal 2021 loss he suffered to Mauricio Lara.

By round four it was clear that Warrington’s once furious workrate was on the wane but he was still able to manhandle Lopez, who kept complaining about roughhouse tactics from the champion.

A flush left hook was Warrington’s best punch of the fifth but Lopez shipped it well and kept swinging back, even after the bell ended the stanza.

Lopez was too macho for his own good in the sixth, dropping his heavy hands and calling for a slugfest.

Warrington obliged generously and clipped him with a handful of scoring shots but still not wobbling the powerful visitor.

Warrington’s chiselled cheekbones were marking up by round seven but he hadn’t seemed hurt by any of Lopez’s unorthodox power shots.

Lopez barely stopped trash talking but a clean left hook from the Brit shut him up for a second in round nine.

But Warrington then whacked him below the belt and Lopez got given a breather by referee Bob Williams to regroup.

Then a clip on the back of the head had the challenger complaining again but thankfully Warrington avoided a point penalty.

Round 10 was scrappy, with too much holding and fans were growing anxious about whether their man was doing enough to convince the three judges he should retain his crown.

The eleventh was Warrington’s best round, thanks to a one-two and later a couple of left hooks that tagged Lopez on the chin.

Lopez spoiled the 12th by holding as much as possible but Warrington chased him around the ring as much as he could and was still swinging at the final bell.

But the cards sounded out another defeat for the Leeds Warrior, leaving his dreams on conquering America all-but over.