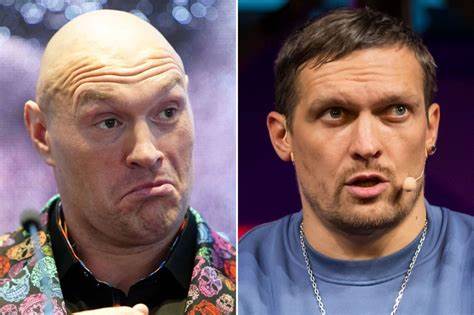 OLEKSANDR USYK plans to still push ahead with a fight against Tyson Fury despite being faced with a new opponent.

Talks are ongoing for the Ukrainian to put his WBA, IBF and WBO belts up against WBC champion Fury next year in a unification.

But a spanner was thrown in the works following the news the IBF are set to order Usyk into fighting mandatory challenger Filip Hrgovic.

Although the pound-for-pound star’s promoter Alex Krassyuk expects the historic undisputed bout to supersede a mandatory.

Krassyuk told Sky Sports: “At this stage I can anticipate that it will not influence the undisputed anyhow.”

Usyk, 35, set for himself up for the heavyweight division’s first four-belt unification after twice beating Anthony Joshua, 33.

But he ruled himself out until next year to spend time with his loved ones having returned to war-torn Ukraine after months training away.

Despite the world title fight at Tottenham’s stadium, negotiations are commencing for next year’s unification.

And Usyk’s manager Egis Klimas even claimed they have agreed to terms, leaving the ball in Fury’s court.

Klimas told SecondsOut: “Everything is done from our side – everything, absolutely.

Chisora earned the shot with Fury after pushing Usyk all the way and could even land himself a rematch if he pulls off an upset next month.

If Chisora beats Fury, Klimas said: “Then we’re gonna go and unify the titles with Chisora.