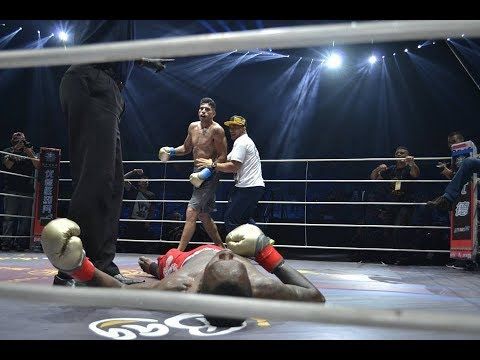 UFC 281: Israel Adesanya brutally KNOCKED OUT by Alex Pereira at MSG as Stylebender’s undefeated MW run comes to an end

ISRAEL ADESANYA’s reign as UFC middleweight champion came to a brutal end at the hands of Alex Pereira.

The Last Stylebender renewed his rivalry with the Glory double champ early on Sunday morning in the main event of UFC 281 at Madison Square Garden in New York.

Adesanya, 33, went into the penultimate pay-per-view main event of the year looking to avenge the brutal knockout loss he suffered to Pereira in his final kickboxing bout five years ago.

But the same fate befell him in the fifth round of a thriller at The World’s Most Famous Arena.

Adesanya was his usual elusive self to begin with, mixing his trademark feints with swift leg kicks.

He managed to draw several big reactions from the big Brazilian, whom he sent backwards with a good stiff right hand.

Pereira tried to utilise heavy pressure and threw his left hook multiple times – although Adesanya was wise to it.

He did, however, find a home for the hook that stopped the fan favourite five years ago before narrowly missing with a flying knee.

But Adesanya punctuated the round with a nasty right hand and a left hook that wobbled Pereira before the horn.

Adesanya’s elusiveness proved to be a problem for Pereira again in the second.

He did a brilliant job of staying on the outside and avoiding Pereira’s left hook.

Adesanya changed tack with a single-leg takedown but it was stuffed by Pereira.

But Pereira ended the round with a takedown of his own after eating a right hand following a separation from the clinch.

A stiff one-two down the pipe snapped back the head of Pereira early in the third.

Pereira reacted by firing a hard body kick, which ended up being caught and led to him being taken down.

And he stayed there until the end of the round, which ended with Adesanya landing an axe kick to the body and more ground and pound.

Adesanya had success with his right hand twice in the fourth – snapping back the head of the fatigued challenger.

The former champion looked to utilise level changes before initiating a clinch.

Adesanya landed a big right hand after breaking the clinch but ate one himself before the end of the round.

A dogged and determined Pereira came out aggressive after the restart and began stalking the champion.

Adesanya fell backwards after checking a kick, although Pereira failed to capitalise on the golden opportunity.

But he did capitalise after hurting Adesanya with a monstrous hook against the fence.

Adesanya’s equilibrium was gone and he immediately went into survival mode.

But referee Marc Goddard waved off the contest after seeing Adesanya fail to answer the brutal strikes, thus bringing an end to the dominant reign of the Last Stylebender.

UFC 281: Israel Adesanya brutally KNOCKED OUT by Alex Pereira at MSG as Stylebender’s undefeated MW run comes to an end | The Sun