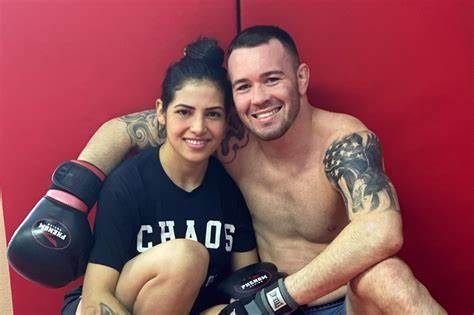 UFC star Polyana Viana has claimed that she refused to perform a sexual act on fellow fighter Colby Covington.

In a now deleted tweet, Viana alleged that the 34-year-old was not happy about her refusal.

The tweet went viral gaining 15,000 likes before it was eventually removed.

It is not the first time the pair have clashed – back in 2021 Covington created controversy when he suggested he had a sexual relationship with the Brazilian.

He claimed it was the reason he turned down a bout with Leon Edwards as he was with her.

However, Viana has claimed she and the man ranked No.2 in the welterweight rankings were just friends and that she already had a partner denying speculation they were a couple.

Viana made the new allegations against Covington after she defeated Jihn Yu Frey via a first round knockout on Saturday night.

She continues to fight at the age of 30 and having given birth to a son named Delvin.

She remains busy outside the octagon with an OnlyFans page, where she often posts racy snaps.

It’s not the first time she has made the headlines, three years ago she beat up a robber who tried to mug her, leaving him with horrific facial injuries.

Covington is yet to respond to what has been said about him.