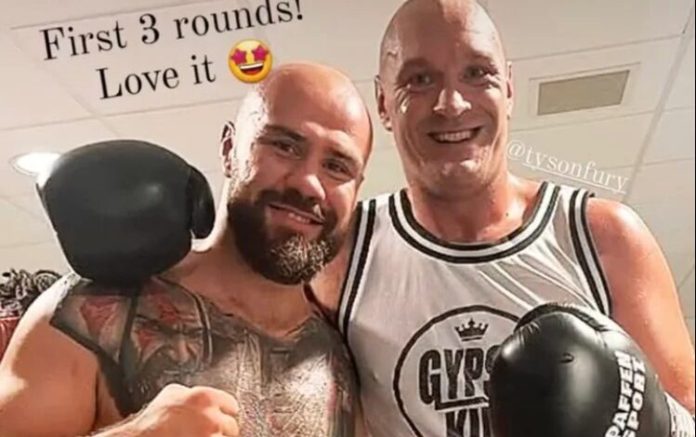 TYSON FURY has drafted in the undefeated Alen Babic for some hard sparring ahead of his domestic dust-up with Derek Chisora.

The Gyspy King has entered the final leg of training camp for his Tottenham trilogy fight with the former world title challenger next month.

Sparring has been as hard as ever ahead for the WBC heavyweight champion.

And Croatian clubber Babic has been brought in by Team Fury to give Tyson some solid rounds ahead of his third defence of the prestigious WBC strap.

Babic shared a post-training photo of himself and Fury to Instagram, writing on his story: “First three rounds.”

Boxing fans were quick to comment on Babic being part of Fury’s training camp, with one saying: “I would love to have watch this.”

Another said: “Fury’s choice of sparring partners have always been great. Smart fighter.”

And another said: “I need to be a fly on the wall.”

One remarked: “I’ve never seen a fighter pick better sparring partners for opponents than Fury does for all of his fights.

“It’s almost always the best possible emulation he can get for any said opponent, can’t wait to see who he’ll choose for [Oleksandr] Usyk.”

Another chimed in: “Sparring [Jermaine] Franklin, [David] Adeleye, Babic and probably many more too.

“Great to see him getting back into the swing of things after a long layoff.

“Hopefully he should be in prime condition for undisputed around March.”

Fury, 34, goes into his trilogy fight with Chisora 2-0 up in their series – which began 11 years ago.

But the Wythenshawe warrior is refusing to underestimate the veteran heavyweight, saying: “He [Chisora] done very well against Usyk.

“And may I say, who the hell is Usyk?

“People didn’t know his name until he beat the bodybuilder [Anthony Joshua] the other day.

“He was a little, small heavyweight who wasn’t going to do anything against AJ when Chisora fought him.

“But then he stepped up and beat the big bodybuilder and now all of a sudden, he’s the killer. I don’t think so.

“Listen, I rate Derek Chisora as highly as I rate Usyk, and I will train as hard for Derek as I will for any man in the world.

“If I didn’t, I would have to be an absolute idiot – I will not underestimate Derek Chisora.

“We’re going to have a fight and that’s it. It’s going to be a good fight too, because he doesn’t shy away and I’m running nowhere, so someone is getting chinned.”