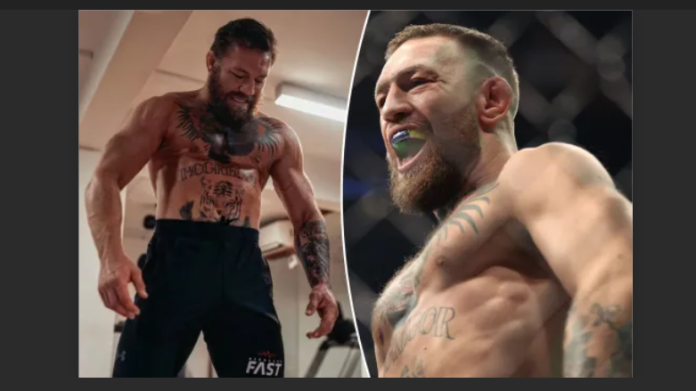 CONOR MCGREGOR has announced plans to make his eagerly-anticipated return to the UFC “early” next year.

An end-of-year return was seemingly on the cards for The Notorious, although discomfort kicking – as well as his role in the upcoming Road House remake – put paid to those plans.

He said on Instagram Live: “I’m going to be back soon, hopefully.

“Early 2023 I’m aiming for. Sometime in that first quarter.”

McGregor, 34, is currently in the Dominican Republic filming his scenes for the Hollywood film – which also stars Jake Gyllenhaal.

And he plans to jump straight back into training after he finishes his filming obligations.

He continued: “That will give me a good couple of months [to prepare].

“Once I wrap this up in a couple of days, get the camp going [for] a good couple of months. And get going.”

Former two-division champion McGregor won’t be back until April at the earliest as he’s currently out of the United States Anti-Doping Agency’s testing pool and has yet to be tested this year.

USADA requires UFC fighters to be enrolled in their year-round testing programme in order to compete in the octagon.

Fighters who have left the pool due to retirement or other reasons are required to be in it for a minimum of six months before competing again.

USADA and the UFC, however, do have the power to waive the six-month testing pool requirement in “exceptional circumstances or where the strict application of that rule would be manifestly unfair to the athlete.”

McGregor, however, would have to pass two drug tests before being granted an exemption.

The UFC waived a then four-month testing pool requirement in 2016 in order for Brock Lesnar to return to the octagon at UFC 200.

But the decision backfired as the WWE superstar failed his post-fight drug test, which discovered traces of anti-estrogen drugs Clomiphene and Letrozole in his system.

McGregor will bid to snap a two-fight skid to Poirier when he eventually returns to the octagon.

“Aware of what I must do and making it happen. Visualizing. I see it all. Clear.

“This movie wraps, I’m back. I’ll have multiple fights completed by the time this movie even releases.”