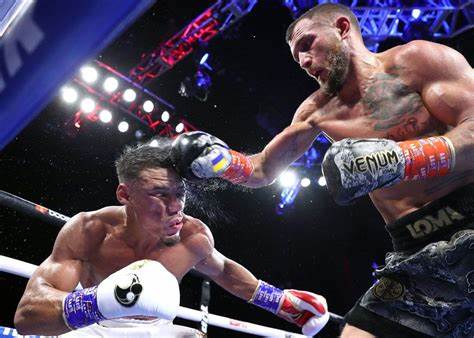 In the first round, Lomachenko kept up the pressure but received a red mark under his right eye from the countering Ortiz. In the second round, a clash of heads only made the injury under the right eye worse for Lomachenko.

In the third round, Lomachenko, halfway through the round, hurt Ortiz with a short left on the chin. In the fourth round, Ortiz came back well, keeping Lomachenko from getting any offense started.

In the tenth round, Lomachenko came back well, taking the round going into the championship rounds that he, not Ortiz, have been through. In the eleventh round, it was more in favor of Lomachenko having hurt Ortiz halfway through the round with a body shot. In the twelfth and final round, Lomachenko showed his experience by going twelve rounds, while Ortiz has never been past ten. Both fighters had their faces showing how it was a battle.

In the ninth round, Ramirez had Romero hurt and bleeding from the nose when Referee Danny Schiavone waved it off.

In the first three rounds, Ragan had the edge in a close fight. In the fourth round, Legron came back well with a good body attack. In the sixth round, Ragan’s mouthpiece came out from a combination of Legron having Ragan hurt to the body.

In the seventh round, again, the mouthpiece of Ragan went out as he seems to be tiring. In the eighth and final round, Legron had Ragan holding on, who has never gone this far in a fight but not trying to fight back.

The referee was Johnny Callas.

In the sixth round, Isley landed an overhand right on the chin of LaVallais, only to have the latter come back with a flurry of punches in the final minute of the round. In the seventh round, Isley seemed to be wearing down LaVallais. Halfway through the round, Isley rocked LaVallais with a right to the chin. There was no quit in LaVallais who would keep coming back mostly to the body of Isley. Referee Arthur Mercante, Jr., in the final seconds, warned Isley for using his shoulder.

In the first four rounds, each fighter had their moments. In the sixth round, Brady took over, taking a slight lead being the aggressor. In the seventh round’s final seconds, Brady landed a big right to the chin of Mondragon. In the eighth and final round, Brady chased Mondragon, who is trying to survive. Suddenly with thirty seconds to go Mondragon rocked Brady with a left hook to the chin having him grab and hang onto the bell.

The referee was Shawn Clark.

In the first round, it was all Ali who opened a cut on the right eyebrow of Wagner with a left hook in the final thirty seconds. In the second round, Ali drew blood from the nose of Wagner. At the end of the round, a clash of heads and Ali got the worst of it at the bell while Wagner made a strong finish to the round.

In the fourth round, Ali finished strong and had the face of Wagner bleeding from the right eyebrow and nose. In the fifth round, Ali was outworking Wagner, who never gave up. In the sixth and final round, Wagner was having his best round until the final seconds when Ali rocked him with a left to the chin.

The referee was Shawn Clark.

In the third round, a body shot from Torrez dropped Hefney, causing

In the first two rounds, the taller Johnson used his jab to counter Garcia, who kept coming forward. In the third round’s final seconds, it was Garcia landed a left to the chin of Johnson, who was backed into a corner. In the fourth round, Johnson used good left and right uppercuts to the chin of Garcia.

In the fifth round, Garcia was having his best round keeping Johnson against the ropes for the most part. In the sixth and final round, Johnson landed over a dozen punches halfway through the round without return. In the final thirty seconds, it was Garcia fighting back, finishing strong.

In the third round, before the start referee, Callas talked to the ring physician. Twenty seconds into the round a flurry from Mason forced referee Callas to wave it off.