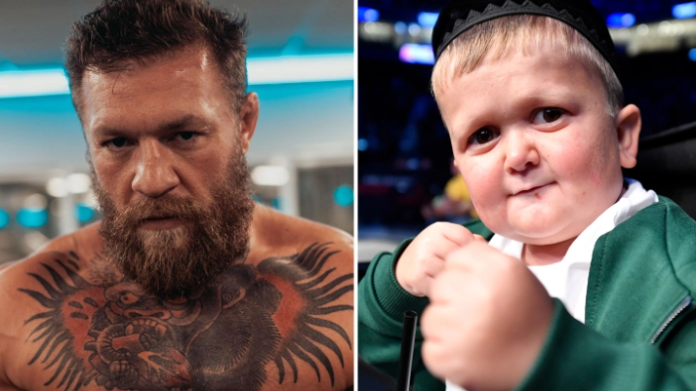 CONOR McGREGOR would get his “ass whooped” by the UFC’s newest star Hasbulla, according to president Dana White.

It was confirmed last week by “Mini Khabib” that he had signed for the MMA company as he prepares to fight on one of their future shows.

And White has now confirmed the deal, telling Robbie Fox: “Yes, we did sign Hasbulla. What he’s going to end up doing remains to be seen.”

However, the UFC boss has warned two-weight world champion McGregor against taking on Hasbulla.

When asked whether McGregor had reached out following the signing of Hasbulla, White replied: “No! He shouldn’t f**k around because he will get his ass whooped if he runs into him on the streets.”

McGregor and Hasbulla have exchanged X-rated messages on social media, with the Irishman labelling him a “smelly little inbred”.

The Irishman then went on to tweet: “I’d love to boot that little g**p Hasbulla over a goal post. How much to get him on the volley?

“I’m gonna make it my mission to score a 3 pointer with him one day, hon the gaa.”

Hasbulla, who is friends with McGregor’s bitter rival Khabib Nurmagomedov, then responded by calling on the UFC to make a fight between the pair.

“Let me eat this chicken Conor McGregor. I’m hungry, I’ll smash him with my mountain spirit.

“My brother Khabib [Nurmagomedov] smashed him and all his team, now is my time to rise!

“I don’t follow bums… I didn’t know someone was running their mouth, @ me next time.”

Hasbulla is thought to have infuriated McGregor by naming his CHICKEN after him.

The social media star called his pet cockerel after the UFC star in August, which is said to have started the bad blood.

Footage emerged of him filming the pet and saying: “This is my chicken, named Conor McGregor. There’s my beauty.”