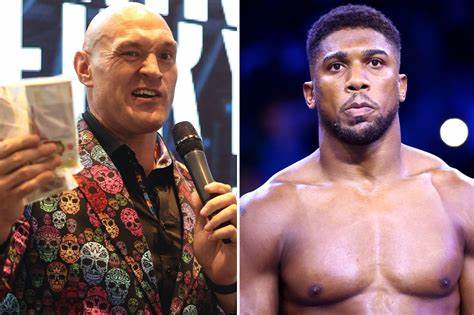 EDDIE HEARN has revealed the reason why negotiations for Anthony Joshua and Tyson Fury’s fight collapsed.

Boxing fans were devastated to learn that the hotly anticipated “Battle of Britain” bout would not be going ahead as initially hoped on December 3rd.

And speaking on talkSPORT, promoter Hearn revealed why the talks between the two parties collapsed.

He said: “It’s probably a bit of everybody’s fault. It’s a very complex situation for both teams, with TV networks.

“Listen, I don’t mind saying, AJ’s just coming off a defeat, he wanted December 17, but we agreed to December 3, he would have had to get back into the gym immediately, which he was going to do.

“I don’t sit here today, as someone who represents Anthony Joshua, devastated that fight didn’t happen.

“He wanted to take it, so I was all in, but it was a very quick turnaround for him in a fight of that magnitude.”

With that put on ice, Fury has instead drafted in Derek Chisora to complete a trilogy against him.

And should Fury win that fight he is then expected to take on Joshua nemesis Oleksandr Usyk in a never-seen-before unified heavyweight title fight that will see all four belts on the line for the first time in the four-belt era.

Meanwhile, Joshua is expected to fight against Dillian Whyte early next year.

“I think he should come back with two standard top 15 opponents, good solid fights, but he doesn’t really want it…

“I think the fight that you’ll see early next year is Dillian Whyte against Anthony Joshua.”

However, AJ was called out by the coach of recently crowned Ring Magazine rank No1 Deontay Wilder as both bid to get themselves back into the title picture.

Joshua showed off a more slimline look recently as he gears up for his next challenge in boxing.