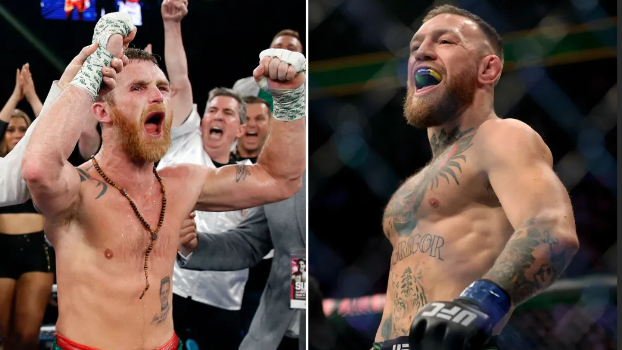 UFC superstar Conor McGregor has allegedly been offered a shock crack at a boxing world title.

The Notorious entered the boxing world in August 2017 for a multi-million-pound showdown with Floyd Mayweather Jr but has repeatedly flirted with the prospect of returning to the squared circle.

And the Irishman has been offered a shot at countryman Dennis Hogan’s IBO light-middleweight title – which Spike O’Sullivan is also in the running for.

Hogan’s manager Steve Scanlan told Irish-Boxing.com: “We have been in touch with both Spike and Conor’s team.

“Spike’s team will move heaven and earth to make this fight, so that is a much easier fight to make happen but we are just working through everything.

“If we don’t fight Conor, which obviously is a long shot, but crazier things have happened, then we will 100% be fighting Spike in Ireland.”

A fight with McGregor would be incredibly hard to make as the Dubliner is still under contract with the UFC.

The former two-division world champion has two fights left on his current deal with the MMA giants.

McGregor, 34, is currently recovering from the horrific broken leg he suffered in his trilogy fight with Dustin Poirier.

The UFC’s poster boy was expected to return to action before year’s end but isn’t back to fighting fitness.

But he plans to make up for lost time after finishing up his part in the upcoming Road House remake.

He recently tweeted: “There is no one in Hollywood with the skills or the capability to do what I am doing in this movie ‘the roadhouse’ Box office records.

“Aware of what I must do and making it happen. Visualizing. I see it all. Clear.

“This movie wraps, I’m back. I’ll have multiple fights completed by the time this movie even releases.”

McGregor won’t be back until April at the earliest as he’s currently out of the United States Anti-Doping Agency’s testing pool.

Fighters who have left the pool must be enrolled in the year-round testing programme for six months before competing unless they’re given an exemption – although they’d have to return two negative tests before doing so.