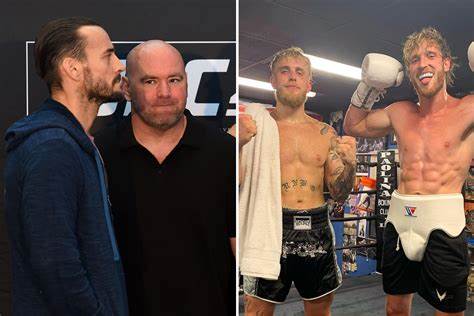 DANA WHITE would never sign Logan or Jake Paul to the UFC as he’s learned his lessons from throwing MMA newbies into the lion’s den.

The Paul brothers have managed to become sizeable forces in the boxing world, much to the frustration of many of the sport’s purists.

The prospect of the pair entering the mixed martial arts world was mooted late in 2019 when Logan outrageously began campaigning for a fight with former two-division champion Conor McGregor.

That talk quickly died down, although there are still some who believe the YouTubers could eventually find their way into MMA’s premier promotion.

Logan doubled down his eagerness to compete in the octagon at the beginning of 2021, saying: “I love the UFC fights. I want to do a UFC fight one day. I’m not saying now, let me get my skills up.”

The chances of Logan’s wish coming true, however, are slim to none given the promotion’s ill-fated CM Punk experiment in September 2016.

The former WWE superstar made his MMA debut against Mickey Gall at UFC 203 with no professional or amateur experience to his name.

The fight went as many expected and saw Punk submitted in just over two minutes.

Although Punk fully immersed himself in the sport, which he deserves immense credit for, his second octagon outing against fellow rookie Mike Jackson was just as bad.

White had no regrets about his decision to give Punk – real name Phillip Brooks – a chance in the promotion, but it served as a lesson about signing fighters with limited martial arts experience.

He previously said: “The thing was CM Punk would come to the fights and he was such a huge fan and he wanted to try this. I gave the guy a shot.

“I’ve never done really anything like that, except for Brock Lesnar. It worked out with Brock, it didn’t work out with Punk.

Punk’s two fights in the promotion, as well as James Toney’s 2010 showdown with Randy Couture, will no doubt be long-lasting memories for White.

And they likely will have ended any celebrity’s hopes of ever competing inside the octagon, including the Paul brothers.

And if they didn’t know it already, White has already made it crystal clear the social media stars will never set foot anywhere near the octagon.

When asked about the brothers, he said: “Neither one of those guys can fight.

“It’s all a big gimmick. Like I said in a press conference, there’s a market for that.

“If people are dumb enough to spend their money watching that s***, I don’t know what to tell you.

“Good luck to them. I [couldn’t] care less what that guy [does].

“I get it. He’s trying to make some money and is doing his thing. There are people who want to spend money on that. I’m not that guy.”