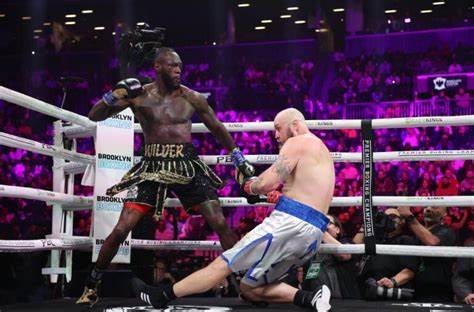 DEONTAY WILDER announced his return to the heavyweight division in trademark fashion with a first-round knockout over Robert Helenius.

The American, fighting for the first time since being KO’d by Tyson Fury 12 months ago, selected rugged Finn Helenius as his comeback opponent.

But it took just under three minutes for Wilder to land his famous right and close the show without any warning.

Helenius, 38, had the ex-WBC champion backed up in the corner which ultimately sealed his fate as a counter shot left him laid out.

“It just feels so good to be back. When I came off the plane and set foot off the ground I just felt a great energy, I felt the love and support and that’s all I needed.

“So when I stepped foot in the arena I felt the same thing and I knew it was going to be a great night and it was for me.”

Wilder, 36, was left considering his career following consecutive stoppage losses to Fury, 34, in their trilogy series.

But a statue built in his native Alabama convinced the Bronze Bomber back for one final chapter in his illustrious career.

He is now lined up for a final eliminator against Andy Ruiz Jr, 33, with the winner becoming mandatory for Fury’s title.

But unified champ Oleksandr Usyk, 35, had called to fight Wilder after Anthony Joshua, 32, and Fury began negotiating for a shock December bout.

Usyk even warned that he could gatecrash Wilder’s big return – although the Ukrainian never showed.

And Wilder fears if the former cruiserweight king had taken a ringside seat, it just might have scared him off a future fight.

He said: “Who’s next? I’ve been hearing rumours about Usyk and he isn’t even in the building, or is he?

“You know most the time when guys say they want me and come to a show of mine and see a devastating knockout that they turn the corner on me, I’ve had many.

“I’m down for whatever, whether it’s Andy Ruiz, or Usyk or whoever. Lets bring it on.