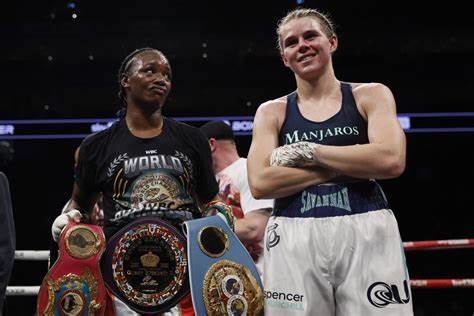 REMATCH talks for Claressa Shields vs Savannah Marshall are already underway with a potential 12-round fight on the cards for next summer, according to reports.

The pair went toe-to-toe in a Fight of the Year contender on Saturday night.

Shields secured the unanimous decision win in front of a packed-out o2 while remaining undefeated and becoming a three-time undisputed champion.

Two-time Olympic champion Shields won with two scores of 97-93 and one of 96-94, getting revenge over Marshall, who she lost to as an amateur back in 2012.

And Boxxer promoter Ben Shalom has confirmed talks are already underway over a rematch.

“Claressa has an MMA commitment, and I’d like to see the rematch in the summer of next year.

“This iconic rivalry has broken boundaries for the sport and it needs to be cherished.

“The numbers it’s done are remarkable; it’s broken all records.”

Shalom also revealed a rematch could be held over 12 rounds instead of 10.

He continued: “A lot of people are saying it was wide, but I don’t think it was that wide.

“Marshall doesn’t think it was that wide. She feels she stuck to a game plan, and maybe she’ll look back and work out what she could have done differently.

“But she wants the rematch; she’ll want it over 12 rounds.

“She’s going to take the rest of the year off, it’s October now already and it’s been an extremely grueling camp and intense 12 months.

“But she’s convinced she has what it takes to beat Claressa.”