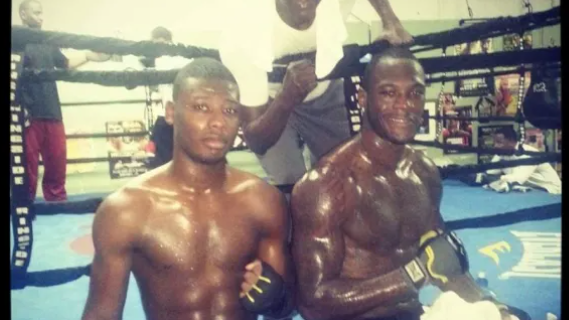 Deontay Wilder hit me with an uppercut so hard I thought I was back in London, says former sparring partner

DEONTAY WILDER hit Isaac Chamberlain so hard he thought he was back in London.

Cruiserweight Chamberlain sparred the former heavyweight world champion when he was just a teenager.

At the time, Wilder was preparing for his career-defining title win against Bermane Stiverne in 2015.

And Chamberlain was on the receiving end of one of the most formidable right hands in boxing history.

“I remember I sparred him when I was 19, he hit me with an uppercut, I thought I was back in London. He’s a solid puncher.

“People always say it’s his power. It’s not really, it’s his speed. He’s very quick off the mark and he processes very quickly.

“People don’t realise it and people only think he’s wild just in general. No, he’s only wild when he has you hurt.

“But he sticks to the basics very well, he’s very, very sharp. So he’s better than what people think.

“There’s method behind the madness.”

No one had an answer to Wilder’s brutal power until he first faced Tyson Fury in 2018, which ended in a draw.

But Fury went on to win the subsequent rematches, both by KO, the last of which has kept Wilder on the sidelines.

The American is set for a return and is making his big comeback against Robert Helenius this weekend.

Wilder says he is going for a FOURTH clash with the Gypsy King after he beats Helenius.

Wilder told Sky Sports: “I think that there’s definitely a chance of a fourth fight again.

“Boxing is a business. Many people call it a sport, but it’s not a sport.

“The heavyweight division is very small. I’m still a big fish in the business, especially here in America.

“As long as we’re all in the same division and all still currently fighting, why not? It only can lead to that. With all that being said, it’s definitely a possibility.”

Deontay Wilder hit me with an uppercut so hard I thought I was back in London, says former sparring partner | The Sun