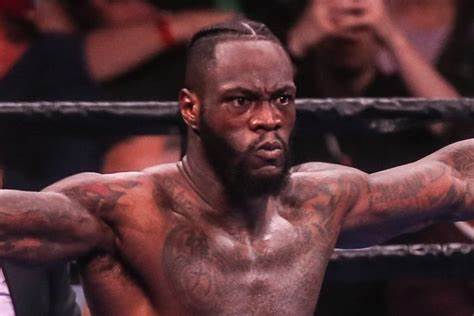 DEONTAY WILDER has thrown down the gauntlet to Anthony Joshua by calling for a blockbuster showdown in Africa.

Wilder, 36, is marking his boxing comeback with a fight against Robert Helenius this weekend a year on from his defeat to heavyweight champ Tyson Fury in Fury vs Wilder III.

And following the bout he wants to face off against Brit Joshua in “the motherland” Africa.

Wilder, who wants to reclaim his title as world champion, told BBC Sport: “I would love to do that fight in Africa.

“It’s still the number one fight in the world for everyone. Everywhere I go, people always talk about me versus Joshua. We both have roots from there.

“I think it would be an amazing place to have it, to go back home.

“To go back to the motherland. A continent full of our people. I can just see that being an amazing fight, win, lose or draw.

“I think we’ll get the respect and love from all the people over there.”

The Bronze Bomber has refused to rule out a fourth fight against Fury, whose own fight talks with Joshua broke down last month.

Oleskandr Usyk is also hopeful of throwing his hat in the ring in a bid to become the unified champion after beating Joshua twice in succession.

As it stands Usyk and Fury look set to throw down for a unified heavyweight title fight so long as Fury completes a hat-trick of wins when his trilogy against Derek Chisora happens on December 3.

But for Wilder to earn a clash with Fury, he would first need to beat former sparring partner Helenius and then Andy Ruiz Jr in a final eliminator.

Africa has played host to some of the most iconic fights in boxing history, such as “The Rumble in the Jungle” between Muhammad Ali and George Foreman in 1974.