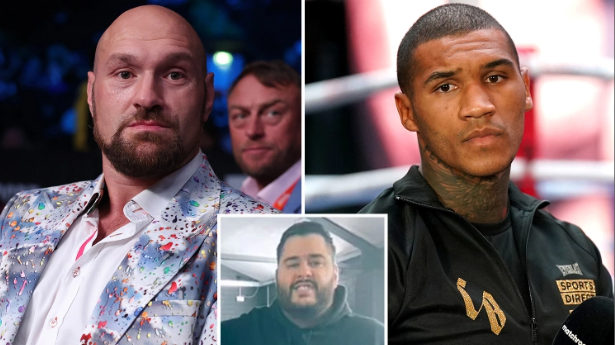 TYSON FURY has backed and will continue working with the controversial doctor the British Boxing Board of Control are investigating in the wake of Conor Benn’s failed drugs test.

Before Dr Usman Sajjad started working with 26-year-old Benn, he gave an extensive explanation on how to evade testing on the Quality Shot podcast.

And he claimed “80 to 90 per cent” of elite boxers are taking a range of drugs to cheat.

Sajjad – who has not been implemented in any wrongdoing – has also spoken at length about the male menopause and how testosterone replacement therapy can be used to fight it.

But the 34-year-old Gypsy King has vowed to stand by the GP who the BBBofC are now investigating.

“I have known him for about a year and he works with quite a lot of boxers and whatever happens I would definitely say it has nothing to do with Usman.

“Usman will be working with me for my next fight, I trust him 100 per cent.”

Fury was in Doncaster on Saturday night to watch his brother Roman make his professional boxing debut with a promising win.

And he explained that Dr Usman’s role in his camp would be that of a personal GP for a training camp and would help him with anything as simple as a common cold or an injury affecting him.

Sajjad’s baffling revealing comments, that remain widely available online, were: “If you are an elite level boxer, you know, pay-per-view, world class, European level, 80 to 90 per cent are doing it (drugs) from what I’m seeing.

“When I say doping, it’s not just steroids. You’ve got IV fluid infusion after weigh-ins, you’ve got diuretics, you’ve got growth hormones, you’ve got testosterone replacements.

“In terms of excuses, I don’t really believe them. Athletes know what’s going to happen if they fail.”

Sajjad went on to detail how the different testing systems work – with limited funding – and claimed only an idiot gets caught.

He said: “A lot of times in how the drug testing system works, a lot of the fights in the UK, it’s all urine testing.

“You have to be an idiot to fail a drug test in England, because urine testing is just 72 hours (most drugs are out of your system within three days).

“You would have to take drugs two to three days before you fight.

“The urine test is after a fight. Whereas the one that trips up a lot of athletes is if you sign up to the random drug testing, which WADA (the World Anti-Doping Agency) do.

“They will track you where you are and can turn up to your house whenever and do a blood test. With a blood test, they can catch things that have been there a month.

“However you can get around the random drug testing, because between the hours of 11pm and 7am, they are not allowed to come to your house.

“A lot of athletes can take fast-acting testosterone or growth hormones which can only be in your body for seven to eight hours.

“You could take it at 9-10pm and it would be out of your system by 7am. There’s ways to get around it. A lot of tricks.”