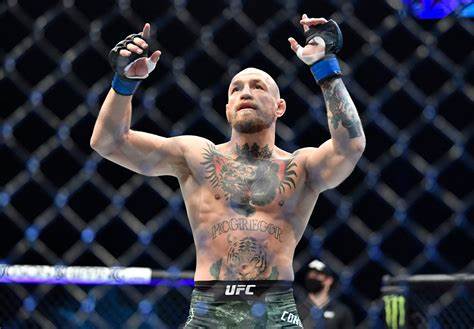 UFC star Conor McGregor has confirmed when he will return to the Octagon and who his next opponent will be.

These included the date, his likely opponent and the weight class it will be fought at.

The post by mmapack reported: “Conor McGregor will fight at welterweight when he returns in early 2023.

“Justin “the Highlight” Gaethje is the front-runner to be McGregor’s opponent.”

The American’s last fight also came in the lightweight category, with defeat to Brazilian Charles Oliveira in May of this year.

It means both he and McGregor – whose last fight also came at lightweight – will need to bulk up to meet the weight requirements.

McGregor has endured a difficult year since his last MMA fight, struggling after suffering from a broken leg injury in the conclusion of his trilogy fight with Dustin Poirier last summer.

He stunned fans over the summer with a video of him kicking in what was a massive step towards his recovery.

It has also been revealed that the 34-year-old has not been drug tested since 2021.

He has also opened the door to a new career path, with acting now a path he appears open to pursuing.

SunSport exclusively revealed McGregor is in talks for a £1.3BILLION rematch with Floyd “Money” Mayweather.

The pair first tussled in 2017, with Mayweather emerging victorious after 10 rounds in Las Vegas.