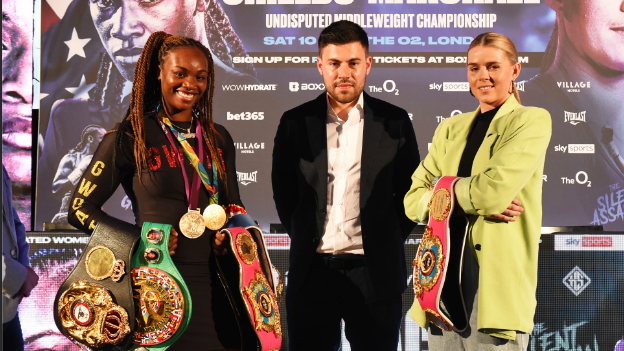 CLARESSA SHIELDS and Savannah Marshall will end their war of words in a huge undisputed middleweight title clash.

The fight has been 10 YEARS in the making – and has now been given a new date.

Marshall is the only fighter to beat Shields inside a boxing ring – by securing a decision win when the two fought as amateurs in 2012.

And Marshall’s trainer Peter Fury has warned that his charge – who has knocked out 10 of her 12 opponents in the pro ranks – is the most powerful puncher in women’s boxing.

Fury said: “She’s got devastating power in both hands. By far the hardest female puncher in history, going back and forward.

“I’ve got somebody who’s six foot, who can make various weights with ease, which is a gift in itself, who’s as bodily strong as some men, with weights, cardio.

“She’s a gifted athlete. The best of Savannah will be too much for anybody.”

When is Claressa Shields vs Savannah Marshall?

The card was postponed from September 10 in a mark of respect for The Queen, who died aged 96 two days prior on September 8.

The fight ring walks will not before 9.40pm, with the undercard kicking off from 6.30pm.

London’s O2 Arena plays host to the show which is still set to be an historic all-female card.

What live stream and TV channel is Claressa Shields vs Savannah Marshall on?

Sky Sports begin their coverage of the show from 7.30pm.

Who is fighting on the undercard?

Mikaela Mayer vs Alycia Baumgardner for the undisputed super-featherweight titles is the co-main for the stacked O2 card.