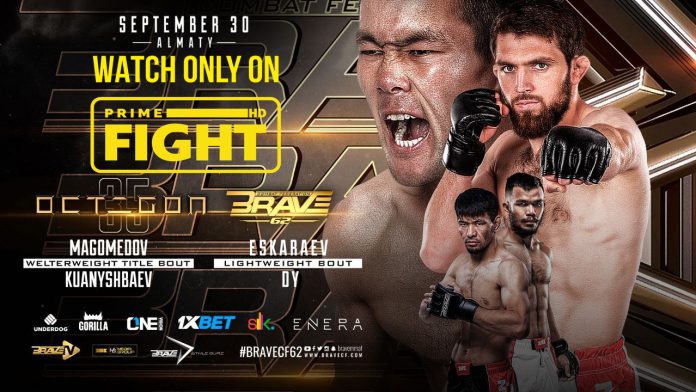 The fans pleaded and BRAVE Combat Federation heeded the call as the promotion returns to Central Asia with an action-packed night of mixed martial arts in Kazakhstan on September 30th. BRAVE CF – in association with Octagon League – hosts its 62nd show in the city of Almaty this month, alongside Octagon’s 35th show.

BRAVE CF 62 x Octagon 35 will once again highlight the organization’s efforts to develop mixed martial arts in the Central Asian region as it continues to bring impeccable Central Asian talents to the international playing field.

As the fastest-growing MMA organization in the world, BRAVE CF also prides itself on creating an infrastructure to support and grow the combat sports industry, offering athletes the opportunity to showcase their talents on a global stage.

BRAVE CF first landed in Almaty back in April 2017 for BRAVE CF 6 before breaking ground in Bishkek, Kyrgyzstan in December 2019 with BRAVE CF 32. Those shows were then followed up by BRAVE CF 53 (Almaty, Kazakhstan) and more recently, BRAVE 59 which took place in Bukhara, Uzbekistan in June this year. BRAVE CF 62 is further proof of the company’s commitment to the development of the sport in the region.

As the leading organization for mixed martial arts in Kazakhstan, Octagon League has led the way in fighter development for Kazakh athletes. The promotion has held more than 40 shows, from their numbered events, to their Selection series, designed to unearth the top raw talent from Kazakhstan to develop it into top fighters that will represent the country on a global level.