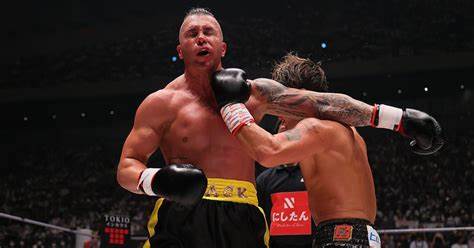 Jizzy Mack, the bodyguard of Floyd Mayweather, gassed after the second round of his bout with K-1 kickboxing vet Kouzi and was knocked out in the third round.

At 42 pounds heavier than his experienced opponent, Mack, also known as Ray Sadeghi, tried to use his heft to avoid the inevitable as he held the head and clinched for dear life.

With his gas tank quickly expiring, he was knocked down by a two-piece at the start of the third and hit the deck face-first after a left hook. Mack, Mayweather’s bodyguard since 2013 and a central figure in the “Money Fight” between Mayweather and Conor McGregor, seemed happy just to be in the ring and give his best.

Kouzi, meanwhile, wasn’t entirely happy with his performance in the exhibition bout, which served on the four-fight Super Rizin fight card at Saitama Super Arena in Saitama, Japan, and aired on FITE TV pay-per-view. With a kickboxing record of 31-16-2, he felt he should have struggled a bit less.

But at 144 pounds, Kouzi struggled early on to get past Mack’s jab and then get space as his opponent hung on his head, pawed out his lead hand, and generally proved an awkward opponent.