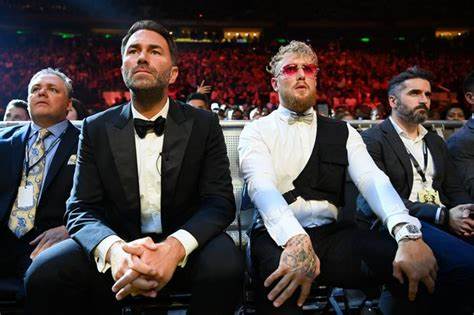 Few people in combat sports are happy with the quality of judging being provided by commissions around the world, but few have allowed their dislike for a specific judge to generate a hundred million dollar lawsuit. Once again, Jake Paul is taking things to the next level by doing just that.

“I still think Amanda Serrano won the fight [against Katie Taylor],” Paul said in a recent interview with IFL TV (which has since been removed from YouTube). “And then you see this judge Glenn Feldman, who had the biggest gap between Taylor and Serrano. Everyone pretty much had it a draw, a draw or that Amanda won. But there’s this judge, Glenn Feldman, who scored it such a big gap for Taylor, gave rounds that Amanda clearly won, to Taylor.”

“Then this judge, Glenn Feldman, shows up in Saudi and scores Anthony Joshua to win [over Oleksandr Usyk]. Everyone who watched the fight, it’s not a split decision. Usyk had a runaway victory, clearly won the fight. This judge, Glenn Feldman, gives it to Anthony Joshua. It’s like a repeated crime here. This type of s—, I’m going to call it out here in boxing because it’s bulls—. Clearly, this guy is getting paid money by Matchroom Boxing.”

So if you’re wondering what words triggered this nine-figure lawsuit between Matchroom Boxing and Jake Paul, there you go. Paul kept digging, though.

“It’s a bold statement and an accusation that I don’t take lightly, but it’s just blatantly obvious,” Paul continued. “They’re not even trying to hide it. You’d think they get a different judge that f—ed up the scoring from Taylor-Serrano. You’d think they’d get a different judge to bring to Saudi Arabia, especially since he’s from the U.S. Why all of a sudden does he appear in Saudi?”

“You’d think they’d get a different judge to try to hide the corruption that they’re bringing to this sport but it’s so blatantly obvious.”

In response to these strong and unambiguous comments, Eddie Hearn filed a defamation lawsuit in New York.

“Both legally and ethically there is a clear line separating opinion from defamatory lies,” Hearn’s lawyer Frank Salzano said in a statement to TMZ Sports. “Jake Paul knows that, and he purposely crossed that line when he wrongly accused Matchroom Boxing and Eddie Hearn of fixing fights.”

“Nonetheless he was still given an opportunity to retract his defamatory statements and refused to. Now he will face the legal consequences of his actions as Matchroom and Mr. Hearn will be seeking damages in well excess of $100 million given the value and goodwill attached to the Matchroom business and the harmful nature of Mr. Paul’s comments.”

Hopefully this lawsuit doesn’t prevent Serrano and Taylor from fighting again in the future. Jake Paul and Eddie Hearn teamed up in April 2022 to promote Katie Taylor vs. Amanda Serrano, an exciting fight that ended up becoming the biggest women’s boxing fight in the history of the sport.

Hearn’s fighter Taylor would take the win somewhat controversially on the scorecards, with one judge awarding Serrano the win 96-94. The other two awarded the fight to Taylor 96-93 and 97-93. Glenn Feldman, the judge in question, handed in the 97-93 score.