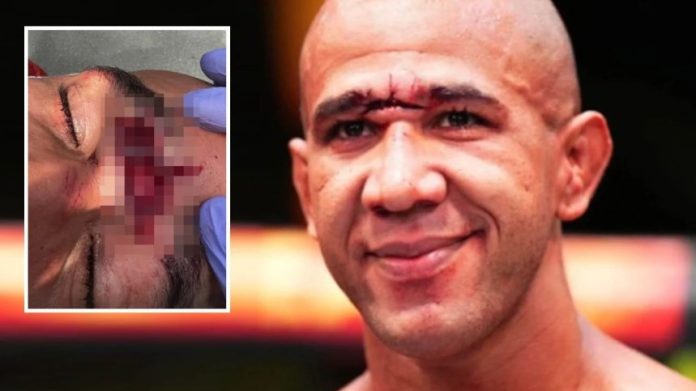 Rodrigues took on Chidi Njokuani inside the octagon on Saturday and took a devastating knee to the forehead in the first round.

That led to one of the worst and most gruesome cuts in MMA history between his eyes.

The cutman did everything he could to stop the bleeding and bought the Brazilian another round.

The 30-year-old miraculously made the most out of his borrowed time as he still picked up a TKO victory after grounding Njokuani in the second round.

But the full extent of Rodrigues’ injury didn’t surface until later when he shared a pic of his horror cut on Instagram.

The wound was so big and wide that it actually exposed one of his arteries.

Rodrigues received stitches immediately after the match that thankfully closed the wound.

But UFC fans were left in absolute shock after witnessing the damage he suffered.

One supporter posted: “Supratrochlear artery. I don’t even want to say what would happen if that sliced open.”

Another wrote: “Wtf how did that happen to his head bro? Can someone tell me, there’s no way a strike did that right.”

A third said: “One more punch to that s**t and he would meet god.”

This fan posted: “This genuinely might he the worst cut I’ve seen in the UFC… an exposed artery is a new one for me.”

And that one said: “Absolutely disgusting.”