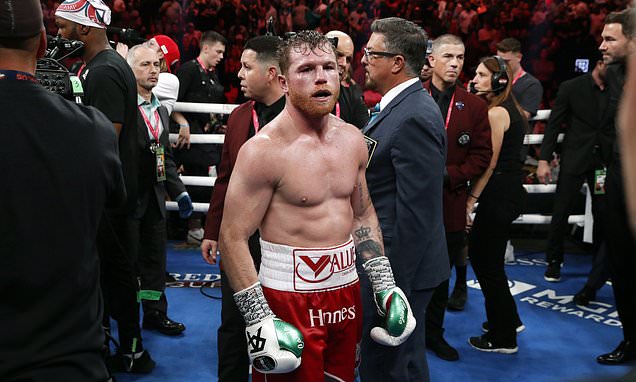 The trilogy was the closest of their fights but it ended in another wild night of Mexican celebrations for a Canelo victory on this famous Strip.

In its whole it was the least splendid of the three encounters but it was brought to a thrilling climax by Triple G’s late rally which brought him within touching distance of what he would have been seen as justice.

It was close enough to be another draw on my card but in those circumstances a narrow win for Canelo Alvarez does not classify as a controversy.

One judge’s score of 116-112 was out of kilter but the other two cards of 115-113 mean a unanimous victory can sit easy on everyone’s conscience.

Canelo thrilled the seething T-Mobile Arena with a barnstorming start which looked to have the fight won by half way. If two or three more of his wild lefts swings had landed he might indeed have pulled off the definitive KO which he craved.

Quite where Golovkin found the energy in his 40-year-old body to mount a grandstand finish only the Kazakh can know. There were moments when he hushed the throng but it was maybe just a little too little too late.

In the end the outcome was acceptable all round. Golovkin put his grievances behind him to congratulate his conqueror as ‘a great fighter’.

Canelo held the man who had been his most bitter rival down the years in an embrace, paid an equivalent compliment and thanked him for sharing history with him.

And we all went into the night happy.

This had been four years in the melting pot. Almost half a decade of bad blood and delay, accusations and anger, demands and denials. All after two dazzling fights besmirched by judging controversies.

We only got here in the end because Canelo needed a route to redemption after the second loss of his career, to the unheralded Russian light-heavyweight Dimitry Bivol four months ago.

And because Golovkin had continued to defy Father Time as he turned 40 and had accommodated Canelo by coming up to super-middleweight for the first time in his career.

And because Golovkin agreed to return to this scene of what he considers the crimes by which the Vegas judges had inflicted the only defeat and draw of his career, in favour of Alvarez.

Oh, and for the money. This is the fight the DAZN digital TV network had foreseen as they poured some of Sir Len Blavatnik’s billions into boxing. With the heavy dues to be paid in purses well into eight-figures when it came to fruition.

Some of that investment was being recouped by pay-per-view buys in America at 85 bucks apiece.

And by thousands of the Mexico Independence celebrants who flocked here, turning Sin City into Margarita-ville and packing the T-Mobile Arena into the pilgrimage.

For Triple G, who has not fought in his native Kazakhstan for eight years, there was nothing new in fighting the crowd as well as the opponent.

The ultimate road warrior is practised at shutting out noise even as cacophonous as mariachi music belted out against the roars of Viva Mexico.

But as the din which greeted pictures on the giant screens of Canelo warming up with his team reverberated along the corridors the cameras were locked out of Golovkin’s dressing room for part of his preparations.

Alvarez entered the arena with famed Mexican singer Alejandro Fernandez walking at his shoulder rendering patriotic songs, to the rapture of the audience. The scene was well and truly set.

As the fight began, it was Canelo who came out swinging as he had promised, though the big lefts missed and Golovkin probably edged the opener.

Canelo then started to get going in the second, establishing his own jab and connecting with a couple of hefty right hands as he scored his first round of the fight.

The super-middleweight champion then went on the offensive, including to the body where Team Alvarez believed they have spied a weakness in Triple G’s recent fights.

Though Golovkin started to put some pressure on of his own, round four was another that Canelo took. As was round five, with Canelo landing the far heavier shots as he started looking for his promised KO. One body shot sent Triple G stumbling back into the ropes.

The tide began to change as the mid-rounds approached, with Golovkin nicking the sixth, the seventh perhaps too close to call. Alvarez then threw in a big three-punch combination to seal the eighth, however.

Golovkin at last came out of his shell with four rounds remaining – and he had Alvarez rocking with a fusillade of lefts and rights from all angles.

The 40-year-old continued to rally as the business end of the fight approached, but Canelo saved himself in the 12th with a late flurry.