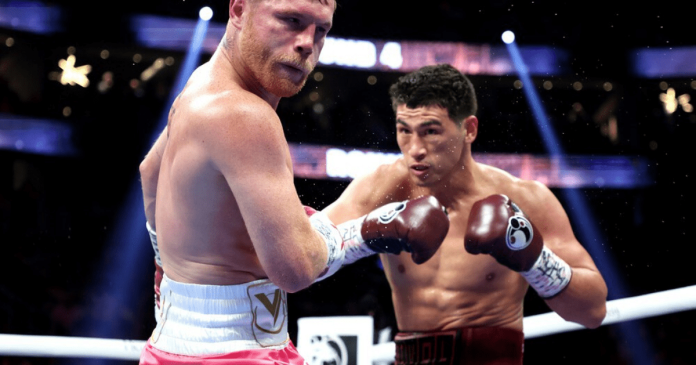 CANELO ALVAREZ is eyeing a Dmitry Bivol rematch after his trilogy fight with Gennady Golovkin.

The Mexican superstar renews his rivalry with Golovkin this weekend in Las Vegas.

And he does so off the back of a defeat to Bivol in May, when he failed in a WBA light-heavyweight title challenge.

But despite moving back down to defend his undisputed super-middleweight crown, Canelo is ready to bulk up again for revenge.

He told DAZN: “You take the risks, pick the best fights out there, you maybe lose one day.

“But I am happy to take these kind of fights because they make me feel good.

“I think my legacy is on the up with these kind of fights and I learn a lot.

“I don’t feel ashamed of that, because I trust myself to be great. I’m going to continue to do it.

“I was in my prime when I lost to Bivol. Not in my weight class, but I think I can beat him easy. But things happen.

“I won the first five or six rounds but then I got tired, that’s what happened, but he’s not better than me.”

But he then moved back down to super-middleweight, winning all four belts in the space of a year.

The pair first drew in 2017 before Canelo won the rematch a year later.

And after a lengthy wait, fans will finally get to see the bitter enemies share the ring once more after 24 epic rounds.

Canelo added: “I think we had a really good two fights. People want the three fights.

“But the people want to know who is the best. He always says I’m not a good champion, I’m embarrassing for my country, but when he is in front of me he doesn’t say anything.

“That’s why I’m mad. He’s a good, difficult, strong fighter. One of the greatest of all time. Our styles are perfect for a good fight.

“I think I’m more mature, more strong, have good experience, and I’m in my prime. That is going to be the difference.

“I think it is going to be a good fight, but my goal is to end the fight before the 12 rounds. Nobody likes to lose, but losing is not an option for me.”